Exploring the concept of recycling through distinctive design, materiality and construction technique, Make Architects will be providing Ecobuild (4th – 6th March 2014, ExCeL London) visitors with a unique space to watch films from this year’s Regeneration Film Festival – a recyclable cinema made from over 1,200 pieces of reclaimed cardboard.

Award-winning international architectural practice, Make Architects, took on the challenge of designing a unique structure to showcase films from the festival and to provide exhibition visitors with a place of rest, entertainment and interest. Made entirely from reclaimed recyclable cardboard, the igloo shaped structure will comprise of 1,271 pieces of modulated hexagonal shapes, stacked and tied together. In keeping with the recycling theme, the efficiently designed cinema will be furnished with chairs constructed out of recycled transport pallets and other reclaimed materials, and the furniture will be donated to a local college after the event.

“We hope the curved geometry of the cinema, combined with the creative use of recycled materials, will encourage curiosity whilst providing a striking and exciting visual impact within the exhibition space. The simple design will allow the structure to be easily constructed and deconstructed before and after exhibition.”

These together with other selected entries for the film festival will be shown at Ecobuild and the winner will be presented with The Gold Brick award, supported by Igloo Regeneration, at the Building Awards by RIBA’s Stephen Hodder in April 2014.

Besides Make, other sponsors of the cinema include Classic Furniture 4 U, LMB Textiles, Red Box and Laser Cutting Services.

Entry to the cinema (stand S245) is free but attendees must register to attend Ecobuild prior to the event, see www.ecobuild.co.uk 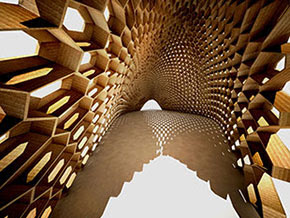 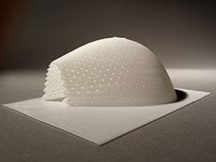