Verde, a major new student accommodation complex in the centre of Newcastle, by Ian Simpson Architects, has started on site. Located on the Science Central site in the city centre, the new £21m complex will house 543 student residential bedrooms. Work on the site is expected to last for just under two years with the first students expected to move in September 2016.

The project has been developed by Downing, one of the North West’s leading property groups.

The two structures will be clad in a green glazed terracotta tile. Laid horizontally across both buildings, a selection of projecting tiles create a sense of movement and signal the buildings’ entrances. Dark blue brick is introduced at ground level where the facade has been recessed. Terracotta tiles and brick have been specified due to their robust weathering capabilities and their strong tones and colours.

To the south lies a landscaped courtyard; the elevations surrounding the garden will feature silver aluminium panels arranged in a checkered pattern alternating between matt and glossy finishes. The panels have been selected to reflect the changing colours of the sky.

Verde will sit to the north of the Downing Plaza development which includes Newcastle University Business School, Liberty Plaza and The View also commissioned by Downings and designed by Ian Simpson Architects, and will offer students a mix of cluster and studio rooms. It will be completed in August 2016. 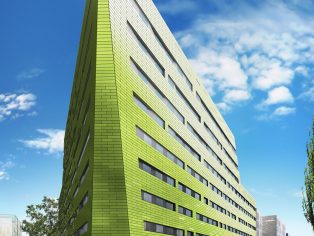 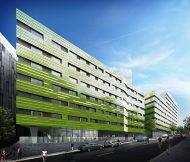