The hotel, leisure & sports sector received a boost in November with construction contracts totalling £875 million, cumulating in the largest total value for the sector this year.

According to the latest Economic & Construction Market Review from industry analysts Barbour ABI, two major projects were commissioned in November that made a significant difference to the sector’s performance. A £400 million new stadium for Tottenham Hotspur and a redevelopment of Wimbledon’s number one court valued at £150 million. The two projects significantly helped arenas & stadia to combine for the highest proportion of contract values in the sector for November, with 63 per cent of the total (please see fig 1.1).

Overall for November, the number of construction projects within the UK decreased by 6 per cent year on year, however the value of projects commissioned in the month was £7.9 billion, increasing by 38 per cent within the same timeframe.

“The hotel, leisure and sport sector has had a subdued year in 2015 after a strong finish to 2014. However the sector seems to have turned a corner in November, thanks significantly to major stadia projects, with even more looking likely to be confirmed over the coming months.” 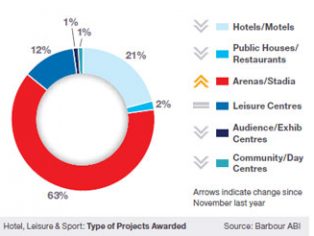