New London Architecture, the think-tank behind the investigation into the capital’s tall buildings boom last year, are now tackling the epidemic that preys on the minds of all Londoners: the housing crisis.

A landmark exhibition, featuring the results of a major international ideas competition backed up by new independent research, will investigate the true extent of London’s housing crisis and how it can be solved. With a shortage of housing for a growing population, and rising prices across the capital, New Ideas for Housing will present the most innovative new housing solutions from London and abroad, and provide the capital’s only in-depth look at the future shape of the housing market.

Providing enough quality, affordable housing is proving to be the biggest challenge facing the capital’s populace; it is forming political policy on a national and local level and will be the main talking point of the Mayoral elections. This issue goes beyond the construction of new homes and encompasses everything from population growth to densities, from the living wage to the recession.

The exhibition, New Ideas for Housing, will showcase the results of NLA’s international ideas competition, set up in association with the Mayor of London, to find some of the most cutting edge housing solutions from the world’s designers, architects, planners, developers, housing associations and decision-makers. Open to all, the competition invited ideas ranging from policy changes, to new construction techniques and technologies, to design solutions, such as floating homes, self-build projects and pop-up housing. A selection of entrants will then be taken to the Greater London Authority to shape the future of London’s building stock. The exhibition will also present results of new in-depth research, exploring the current state of London’s housing market, while highlighting some of the most substantial housing schemes already currently underway across the capital.

In-depth research has shown that there are many factors that can be attributed to the crisis, including rapid population growth, land costs, rising rents, improved infrastructure, migration to the suburbs, and the need for those on low incomes to live close to work.

The chronic undersupply of housing has little changed in the last 150 years. Even in 1866, James Hole, an educationalist and reformer, identified slow progress to change and adapt policies and delivery, and a lack of motivation to provide low-income housing due to poor financial returns. How we tackle this issue, therefore, will require a major shift in our approach to housing policy, finance, design and construction.

“Scanning the literature about London from the mid-nineteenth century onwards reveals that a housing crisis, whether of supply or affordability, has dogged London since its first industry-inspired expansion. The causes and attempted remedies have been different over the 150 intervening years, but the ‘holy grail’ that London’s housing supply should meet its demand in both numbers and quality (including affordability) seems to have eluded all generations including our own.”

“If necessity is the mother of invention, right now London should be experiencing a highly creative period as far as housing is concerned. But we aren’t producing enough housing of the right kind in the right places.”

“We need to build many more new homes in London. For decades, the number of homes built has not kept pace with population growth. For many Londoners, housing availability is their greatest concern and addressing the shortage is now one of the biggest challenges facing our city.”

London creates between £10-20 billion of added value per year for the UK economy so housing the capital’s population provides an issue of high priority to the country’s politicians. Current numbers show that 80 per cent of all new housing built in London is only affordable for 20 per cent of its population. The NLA will question what the future holds for London’s residents.

New Ideas for Housing will run alongside an extensive set of talks, debates, site visits and seminars. A major public debate will also be hosted by the NLA in November. 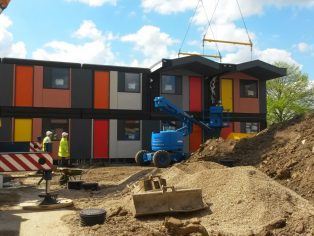