If you enjoy a slice of pizza now and again as well as interesting design, pay a visit to Fucina restaurant on Baker Street in Marylebone, where the architectural interiors evoke the visual and tactile qualities of the tasty Italian dish.

The sculptural brick ceiling dips sensuously like fresh dough in the hands of a master chef, its shape directly inspired by

the undulating forms in the interior of a traditional pizza oven. On the lower ground floor, the open fire pit looks through to the chef’s table, where shiny blackened steel panels on the walls resemble mozzarella bubbling in the oven. Elsewhere, features such as stained glass windows, light fittings with candles, and traditional materials like marble, brick and timber, subtly evoke the religious and classical traditions of Italy. “The aim was to invent a spatial experience that mirrored the brief,” says Andy Martin, architect for the project’s interiors. “We wanted to use the space to invoke a visual memory of Italian taste, a contemporary reinterpretation of these memories. The space is sculpted to stimulate, the forms are organic, the materials raw and refined, a reflection of the food on offer.”

Fucina is conceived as a high quality food-led restaurant that showcases the diversity of taste inherent to Italian cooking. The client, restaurateurKurt Zdesar, is something of a guruin foodie circles, having previously launched the famous Ping Pong dim sum restaurant chain.

In September 2013, he opened Chotto Matte in Soho, known for its Nikkei cuisine and cocktails and a second international outlet is expected to open next year in Miami. Both Chotto Matte projects were also designed by Andy Martin Architecture (AMA).

“Where Chotto Matte is clubby and fun and aimed at a market of 25-35 year olds, Zdesar wanted to do something totally different with Fucina, something more serious and food-led with a focus on organic produce.”

In the constant noise and bustle of London, the circa 600 m2 restaurant is intended as a quiet haven, characterised by softened edges and wandering lines. A polished timber floor weaves through the restaurant between circular borders of hand-laid coloured marble chips set into traditional ‘terrazzo cemento’.

The mosaic floor gives the impression of moving water and was directly inspired by terrazzo floors in the famous Olivetti showroom in Venice, designed by architect Carlo Scarpa in 1957-58.

The gravity-defying ceiling was originally conceived as a series of inverted brick vaults, inspired by historic four-sided vault structures seen throughout Italy. However, the idea evolved into a more fluid shape more closely aligned with the brief to create something organic.

The ceiling includes over 32,000 bricks, each between 50-60 mm wide, 260 mm long and 15 mm thick. There are 27 different sizes in total. “When we went to tender, a major consideration was who would be able to make that ceiling. It is very heavy, we had to work closely with the structural engineer, Milk Structures, and the fit out contractor, Bridport Interiors, to design an effective support structure,” says Martin.

The two bulges were formed using a steel frame, covered with four layers of 5 mm-thick plywood, which was bent into shape then covered with a layer of special tiling board designed to soak up adhesive. The bricks were laid onto this, every second brick with a small notch in the side where a piece of wire ties it back through to the structure to improve the ceiling’s structural integrity.

The bricks are ‘commons’ – a more cost-effective alternative to Italian hand-made bricks – treated with a lime wash to give them a greater a sense of “depth”.

Fucina translates as Forge, which in Italy relates not just to the use of fire to heat metal, but the traditional kitchen fire used for cooking. The open fire pit kitchen on the lower ground floor is used for all the restaurant’s meat grilling and is a major aspect of the food concept. Burnt steel is used throughout the scheme, including for the lighting and ironmongery. A series of blackened steel floor-to-ceiling screens in the dining space can be closed to obscure the street and reinforce the sense of intimacy.

Two different types of marble, imported from Italy and Portugal, were specified to create features including the large bar and the floor, ceiling, walls and hand basins in the toilets.

“When I think of Italy, I think of marble,” says Martin. “Some marbles appear very organic but are also very rigid and architectural, I like the play between the texture and the function of the material.”

High end materials, such as the marble and blacken steel, contrast with more common ‘rustic’ materials including brick, exposed concrete and timber to create texture and warmth. Many surfaces have a neutral, plaster-effect finish with a roughened surface to add interest.

“The spatial experience, with the dipped ceiling, is quite dramatic, so the more common materials help make the environment feel less intimidating for diners,” says Martin.

The restaurant incorporates 110 dining covers including low-backed bespoke banquettes (upholstered benches) installed along walls and arm chairs. The furniture takes inspiration from the branches and roots of trees, the large tables appear to “grow” from the floor, the chairs are fabricated from machined branches. All the furniture, lighting and ironmongery was custom-designed by AMA.

Italy is famous for its ecclesiastical architecture and many visitors will be familiar with iconic buildings such as the Cattedrale di Santa Maria del Fiore, the main church of Florence with its incredible dome, the mighty St Peter’s in the Vatican, and Pisa cathedral, one of the most impressive examples of Romanesque architecture, built between 1053 and 1272.

Fucina aims to convey the reverential atmosphere of a church. The chunky timber entrance doors are reminiscent of unwieldy church doors, the curved brick ceiling is crypt-like, the glazed external walls include panels of coloured glass, a contemporary nod to stained glass windows. Lighting fixtures in a rear space include real candles that reflect on polished stainless steel. “No one has ever walked inside and said it felt like a church, but we wanted to create a subtle religious reference,” says Martin.

Sometimes the architects’ pursuit of quality materials and finishes was a challenge due to concerns over budget, and the practicalities of construction. An original plan to install a kiln-dried engineered timber floor would have pushed the project over budget, so a more cost-effective timber was specified and French polished in situ to achieve a similar finish.

A single piece of marble, due for installation on the ceiling over the bar, had to be split into two sections to manoeuvre it down the narrow staircase into the space.

The structure of the existing, recently constructed building raised issues due to the lack of adequate penetrations for restaurant services, or connections for water and power. As a result, the contractor had to build a large ventilated room in

the car park, plant for extract ventilation had to be installed on the roof, and a number of air conditioning condensers had to be spread between the roof, car park, the restaurant and the bakery next door.

“It’s hard to design buildings for every kind of circumstance, but here some basic rules were not followed, which made our job much harder,” says Martin.

“We hope this is a project people can return to many times and appreciate the attention to detail which may not be immediately obvious,” says Martin. He concludes: “Today, restaurants are becoming less about the food and more about the experience, most of all, we want people to enjoy the space in Fucina, it’s an ambition that I believe we managed to achieve here.” 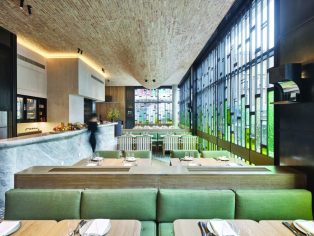 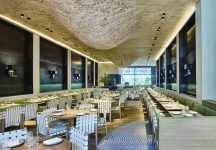 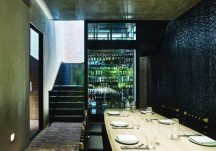