LWK & Partners (HK) Ltd. (“LWK” or the “Company”) is proud to present yet another masterpiece – Landmark Riverside Park Phase II Danzishi Old Street, a comprehensive cultural commercial experience that bridges the old and new, the oriental and western. “Chongqing Landmark Riverside Danzishi Old Street” also received a plaque at its opening ceremony on 1 June, where it was officially certified as an AAAA Class national scenic area. LWK was responsible for the Masterplanning and Architectural Design for the project.

Located in Chongqing’s Nanan District, overlooking Chongqing Grand Theatre and Chaotianmen Wharf, and on the waterfront between the Yangtze and Jialiang rivers, the retail precinct spans across a 21,500 sq m site to form a kilometre-long street, and follows the concept of ‘one street; two docks; four courts; ten scenic attractions’. Centred around the glamour of old Chongqing, many of the old scenic attractions have been preserved, while other historical buildings have been refurbished to be revitalised, such as the former French Navy Barracks Building. The history of the site was retained in the brand new development. To complement these traditional elements, new buildings on Danzishi Old Street adopted a modern Chinese architectural style. Framed viewing windows and patterned grids and screens were installed to direct the line of vision to appreciate the picturesque scenery. The traditional blue brick tiles are renewed with the addition of modern materials, while classical patterns are reiterated as modern geometric shapes.

Danzishi Old Street is the first 4A national scenic area to receive the honour under the theme of ‘port culture and Grade 9 hill slope forms’. The unique landform posed additional challenges to the development of the site, as the highest and lowest points of the project have a difference of 80m in height. Instead of levelling it off for easier development, the designers devised a multiple platform layout for the project to minimise disruption to the natural landscape. These platforms on different levels are linked by stairs, escalators and others forms of vertical transportation to facilitate flow of foot traffic. This also ensures that the scenic view can be enjoyed to the fullest so as to utilise the site’s advantage of being at the waterfront. All buildings in the development are low-rise buildings to facilitate ventilation throughout the site. ‘One street; two docks; four courts; ten scenic attractions’ laid down the overall development plan for the site.

‘One street’, being the central concept, revealed that the core of the project is Danzishi Old Street, from which all the other elements emerged. ‘Two docks’ refers to the lower pier and upper port, connected by the one Danzishi Old Street. ‘Four courts’ are scattered along this line of motion as part of the multi-level layout, including Wang’s Court, Sun’s Court, Xia’s Court and Qingyang Mansion. The ‘ten scenic attractions’ are the true heroes of the cultural commercial experience – they offer alternative choices for non-commercial-oriented visitors to spend quality time at Landmark Riverside Park. These attractions include Haiguan Stone, Yingyue Pond, Qingyun Bridge, Huachao Gate, Yuyin Balcony, Lichuan Hao, Tushan Kiln, Wall of Love, Yide Catholic Church and Baisui Arch. Possessing such extensive scenic and historical value, the project has successfully attracted various internationally renowned brands as anchor tenants for the development, such as Kumamoto Milk Tea & Store (Japanese mascot-themed F&B), Popular (Singaporean book mall) and Madame Tussauds (French wax museum chain).

Phase I of Landmark Riverside Park was launched in late 2016, and LWK was responsible for its Architectural Design. Being a partnership between Hongkong Land and China Merchants Shekou Holdings, the project was intended to become the first cultural tourism complex in Chongqing. Stemming from the same tree, Phase I also puts an emphasis on the site’s historical and cultural value, but deviating from Danzishi Old Street, which is mainly a commercial development, Phase I is a mixeduse project comprised of residential, retail and office developments. Phase I has successfully made a name for itself in the global community by taking home the Global Retail & Leisure International Award for RLI International Retail and Leisure Destination in 2018.

The reinvented Danzishi Old Street is a new body housing the essence of the old street. The mix of old and new, oriental and western is apparent throughout the whole development. The familiar yet different texture of the historical site appeals to both home-grown locals and new comers of the city. The former can immerse themselves in childhood memories, while the latter can start to learn about its history in a modern light. Danzishi Old Street is more than a retail or commercial space – it is a vehicle of history and culture of Chongqing. 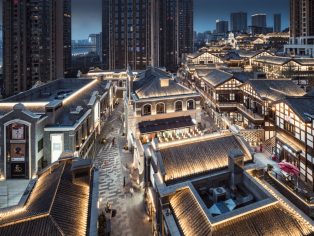