LDA Design helped deliver the concept through the design and build contract which was awarded to Skanska with support from Willerby Landscapes. The concept has transformed the south of the Park from the Games time concourse into a high quality, and permanent addition to Queen Elizabeth Olympic Park.

New features of the south of the Park include The Water Labyrinth – a major new water feature –designed by the Fountain Workshop as part of JCFO’s award winning team, which is a water play facility situated between the London Aquatics Centre and the Stadium; the ‘Promenade Arc’, an impressive avenue of semi mature trees of mixed oak, Tulip tree and lime trees, interspersed with a decorative catenary lighting scheme by Michael Grubb Studio, consisting of perforated metal globes lit from the inside which run the entire length of the south of the Park; and the transformation of ‘Carpenters Lock’ to become a new contemplative space, created from opening up the space beneath a bridge that was covered temporarily during the Games. The famous Dutch horticulturist Piet Oudolf, has designed a Herbaceous Ribbon planting feature which forms the framework within which are set various play features, seating and lawns.

“We are really looking forward to the opening of the south of the Park. We have worked on Queen Elizabeth Olympic Park for over six years, and have seen it transform from Games-mode into a fantastic, high quality space for public use. The new south area of the Park not only provides an aesthetically pleasing space that can be enjoyed by everyone, it also showcases the collaborative effort of the design and contractor team.”

In 2008, LDA Design was appointed to lead the masterplanning and detailed design of the London 2012 Olympic Park, now known as Queen Elizabeth Olympic Park, and is currently working on the post-Games transformation; ensuring the permanent legacy of 102 hectares of Parkland. 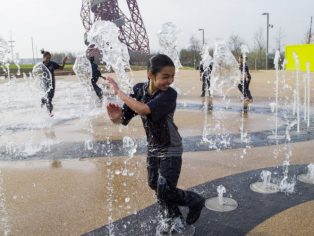