Organised in association with Dezeen, Heal’s and RIBA London, and sponsored by Hansgrohe Axor and Schueco, the awards are now in their sixth year and continue to seek out architectural innovation, from extensions on top of, underneath, on the side or back of buildings, to interior insertions, conversions, and garden studios. The competition celebrates projects that demonstrate exceptional innovation in the creation of new living spaces for Londoners.

The jury will be made up of experts and journalists from across the industry, including Russ Edwards, design director of Pocket Living, with winning and shortlisted projects featured in a three-month exhibition at NLA’s central London galleries at The Building Centre, from January to March 2016, and also in a dedicated publication.

Winning practices receive a year’s membership of NLA, the opportunity to participate in the competition’s associated events programme and coverage in Dezeen. All shortlisted practices will also be invited to take part in a series of design surgery events throughout the year, offering one-to-one advice to members of the public.

Last year’s winner was Ravenswood by architects Maccreanor Lavington. This timber-framed extension to an end-of-terrace house on a 1960’s estate in Gospel Oak was praised by the jury for its sympathetic interaction with the neighbouring vernacular styles, and illustrates the scope for improving London’s estates.

Any home extension or improvement project completed within the last two years (since September 2013) within one of London’s 33 boroughs is eligible for entry. The deadline for submissions is 6 November 2015 and the winners will be announced at an awards reception on Thursday 21 January 2016. 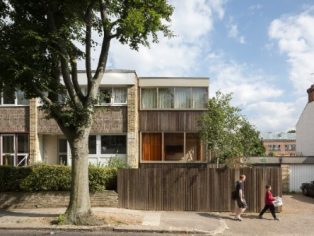