London’s past, present and future mapped out by new interactive model unveiled by NLA

New London Architecture (NLA) has today unveiled a new interactive model of London in the NLA galleries at The Building Centre just off Tottenham Court Road. Measuring 12.5 metres in length, the New London Model will provide a focal point for Londoners and tourists alike to learn about the history and future development of the capital.

NLA, London’s foremost independent forum and think-tank on the built environment, marks its 10th anniversary this year with a comprehensive series of exhibitions, research projects, events and tours exploring the capital’s development. At the centre of the 2015 programme is the launch of the New London Model. The model replaces its predecessor, first unveiled at the organisation’s inception a decade ago, the day after the announcement that London had won the Olympic bid.

Built by Pipers with data supplied by Ordnance Survey, the 1:2000 scale model covers more than 85 square kilometres of London, 19 Boroughs and approximately 170,000 buildings, including 34km of the Thames with its corresponding 21 bridges. It extends from King’s Cross in the north to Peckham in the south and the Royal Docks in the east to Old Oak Common in the west.

A sophisticated projection and lighting system allows buildings and major infrastructure projects to be digitally animated across the surface of the model. Controlled by touchscreens, visitors are able to call up detailed information and key facts on London’s newest buildings and future projects that will help to define the capital. The model is the city’s only physical manifestation of how London will look and progress as new buildings and developments are given the go-ahead.

A series of five bespoke interactive films, integrated with live projections, bring the story of London’s past and future physical development to life. The series documents the history and development of London; the impact of the London Plan; the future of infrastructure in the capital; the rise of tall buildings and the ongoing influence of the Great Estates as a sustainable model of development. New films are set to be commissioned to coincide with NLA’s ongoing programme of Insight Study research pieces.

Key moments in history that have shaped the fabric of the city are displayed through sophisticated lighting displays and audio presentations, such as the Great Fire of London in 1666. This event is dramatically visualised on the model as the Square Mile appears to burn while the rest of the city is plunged into darkness, highlighting the terror and devastation that ravaged London.

The future development of the city is represented with the location of the 263 tall buildings planned or under construction in London mapped across the model. Visitors are also able to track the route and impact of new transport links, such as HS2 and Crossrail 1 and 2 on central London and the outer boroughs.

At the launch of the New London Model, Peter Murray, Chairman of NLA, commented:

“This model will be a spectacular tool for all those who want to know more about London, who want to understand how it works and how it is shaping up for the future. It will appeal to the public, to professionals and visitors to London alike.”

Katie Kopec, Director of Development and Consultancy at JLL, the global real estate consultants and supporters of the launch of the New London Model, added:

“We are delighted to sponsor the launch of this fabulous new model which displays how London is constantly evolving. The emergence of new infrastructure brings new life and vibrancy, reinvents places and keeps the city at the forefront of innovation and design. With this interactive creation, the NLA highlights London’s position in the top tier of Global Cities and highlights its exciting future.”

The New London Model will offer an ever-evolving display, allowing visitors to see how the city will adapt and change, creating a newly improved centre of discussion for London. Regular architectural walking tours of eight central London neighbourhoods – taking place on the second Saturday and last Wednesday of each month – will further reveal how the capital’s buildings and streetscapes are changing. 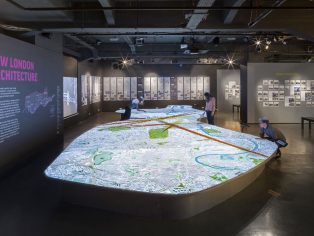