Comprised of 33 nominations, the shortlist features projects from across the capital, ranging from a floating writer’s hut in Enfield to a lantern-like extension in Richmond.

Now in its sixth year, the competition has received a record number of entries, demonstrating a strong desire for people to use the best designers to radically rethink the homes in which they live. Among those to make the final selection, David Kohn’s Sanderson House features a sloping roof alongside a careful combination of materials and colours to create a vibrant and spacious new addition to the home. Two distinct styles remain closely connected to each other as a red brick façade continues the material palette of the existing house. Vivid interiors and porthole-like windows ensure that the Sanderson House is a modern interpretation of the traditional London home.

This connection between the old and new provides both a challenge and an exciting opportunity for designers when constructing an extension. House of Trace by Tsuruta Architects chose to highlight the lines of the existing building to help create a subtle merge between the original and brand new elements of the house, made of glass and brick. Exposing the heritage and imperfections of the home, House for Trace features a minimal materials palette and a spacious internal floorplan.

Creating extensions in conservation areas proved to be a hurdle for many of this years’ shortlist but resulted in some of the most inventive solutions. The Lantern by Fraher Architects features a vertical addition a listed residential building in Richmond. An American Black Walnut staircase wraps itself up through the building while vertical glazing creates a glowing effect at night. Brackenbury House by Neil Dusheiko Architects is the dramatic reshaping of a home in a strict conservation zone in west London for a growing young family. Featuring a pop-up cinema and a sky-lit bathroom, the design adds a new basement with a beautiful glass ceiling enabling a greater sense of connection between the kitchen/living space and the new downstairs interior.

A minimal additional to a terraced house in Camden by Ben Adams Architects also made the shortlist. Placing the kitchen at the centre of the home, the redesign of this family house features a series of concrete floors, kitchen counter and stairs that flow seamlessly into one another, uniting the house through the use of a single material. The extension demonstrates how minimalist design can create a warm family environment.

Properties are not only extended for extra living space but are quite often the result of a need for home working. The Cut and Frame House is the adaptation of a semi-detached home in Enfield to create a new work/live environment for the owners. Designed by Ashton Porter Architects for a children’s book author and a therapist, the project was driven by the need for the owners to be able to both work at home but have their own separate areas. The resulting design is formed by a large floating frame with a moveable glass panel that can be adapted to create both internal and external working spaces. Large glass panels facing the garden area enable the house to have a close connection to the outside for family activities whilst still providing privacy and tranquility within the home for working.

Extensions are not only dictated from external additions – London Fields by Scenario Architects has been designed from the inside out placing a curving staircase at the core. Located in an existing mixed-use building, the project utilizes natural daylight and features a sunken roof terrace, which has sections of glazing allowing the outside to be viewed from the inside.

Other nominations included Folds by Bureau de Change Architects which features a unique faceted roof, resembling a flat surface being folded back on itself and Grange Yard by Michael Trentham Architects – a tiny 30sqm cantilever structure placed on an existing building.

Organised in association with Dezeen, Heal’s and RIBA London, and sponsored by Axor Hansgrohe and Schueco, the awards are now in their sixth year and continue to seek out architectural innovation, from extensions on top of, underneath, on the side or back of buildings, to interior insertions, conversions, and garden studios.

The shortlisted projects will now be featured in a three-month exhibition alongside the complete longlist of 84 projects that made up the first stage of the awards at NLA’s central London galleries at The Building Centre, from January to March 2016. Winners will be announced at an awards reception on Thursday 21 January 2016 a public day on Saturday 27 February will give Londoners wanting to extend their homes the chance of free one-to-one advise sessions with shortlisted and winning architects. 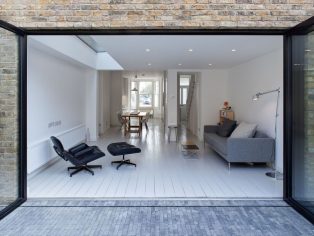 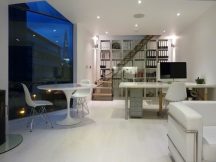 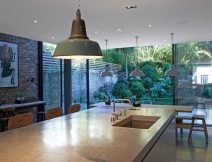 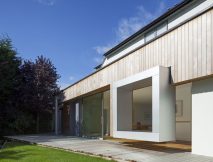 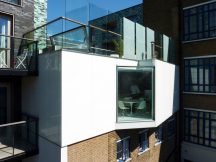