The London studio of global design practice Perkins and Will has won an internal firmwide competition to design a co-living community concept that responds to the housing crisis affecting major cities worldwide.

The annual Phil Freelon Design Competition was renamed last year in honor of the late architect and Perkins and Will design director who championed design for humanity. The competition is part of the firm’s commitment to continuous self-improvement through a culture of innovation.

The London studio submission, led by senior interior designer Hala El khorazaty and design applications technologist Vangel Kukov, focused on reimagining an industrial site in one of New York City’s most expensive neighborhoods, the West Village of Manhattan, was inspired by the concept of “arroyo”—a place that was once dry which then transforms to a stream of life after rain—to create a community-led, sustainable co-living development.

Housing affordability has become a critical challenge in many global cities, making this competition particularly timely; just as New Yorkers deal with exorbitant housing costs, and San Francisco faces a housing crisis, London residents with a median salary would, on average, need to spend nearly half of their pre-tax pay on a typical one-bedroom house or flat. The design exercise gave the London-based team the opportunity to think about housing affordability issues as a universal human right, rather than a localised, city-specific one.

With the proposed co-living model, renters will have the opportunity to live in a high-quality development, with an actively involved community and options for reduced rent.

The London team designed a model for an app which helps organise bills and allows residents to earn points through involving themselves in the community to subsidise rent payments.

To truly emphasise the sustainability of the project, the team focussed the entire piece around the concept of Living Design, to create an almost circular carbon footprint within the building. As well as using the existing foundation to minimise their carbon footprint, the London team designed a structural system using cross-laminated timber (CLT) and glued laminated wood (glulam) in a diagram pattern, to form a unique, lightweight, and environmentally friendly structure for the building.

For operational efficiency, the design includes solar panels on the roof, rainwater reuse, greywater recycling, blackwater treatment, rooftop and kitchen gardens, a hydroponic farm, and a range of smart appliances and sustainable devices. Furthermore, all materials were chosen from Perkins and Will’s Precautionary List—a compilation of the most ubiquitous and problematic substances that people encounter every day in the built environment—to ensure that everything used is non-toxic. All of these aspects seek to create a building that is healthy for both the residents and the planet.

Penoyre & Prasad, a studio of Perkins and Will London, also received recognition for its team’s project, the Aspen Cooperative, led by designers Richard Schunemann, Thomas Henderson Schwartz and Vaia Vakouli. Like an aspen grove, the concept is rooted in the idea of interconnectivity—resulting in a seamlessly integrated project with sustainable elements in its cross-laminated timber structure.

Hala El Khorazaty, Perkins and Will said: “We are really excited to win this internal design competition which has been a great opportunity to promote a diverse range of designers across international studios of Perkins and Will. We put a lot of consideration into all aspects of the project and how shared spaces can be utilised in the best possible way. From the selection of materials, apartment layout and building structure, to how the residents would live and interact with one another through community incentives, it was important to us to consider every element to create this unique concept that could potentially help many global cities around the world which are facing a housing crisis.” 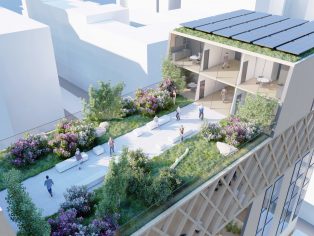