London Festival of Architecture (LFA), the annual, city-wide celebration of the capital’s buildings and landmarks, returns for the entire month of June with over 200 activities stretching across every corner of London.

Since its inception in 2004, LFA has constantly engaged and excited new audiences, placing architecture firmly at the forefront of the cultural agenda. Now in its tenth anniversary year, the festival is developing its role, helping to transform the perception of architecture from a niche interest, to a vital element of the UK’s cultural, economic, social and financial framework.

Using the theme CAPITAL, the festival invites the public to explore different facets of London: its culture, people, economy and its built environment, providing the opportunity for engaging and thought-provoking debate.

Issues covered in-depth will include the housing crisis, and the rapid increase in the development of tall buildings, with events and activities designed to put these subjects firmly on the political agenda.

The LFA is delivered through a programme of events organised by London’s leading cultural and academic institutions – including the Royal Academy of Arts, Design Museum, V&A, Royal College of Art, Serpentine Galleries and National Trust – as well as associated projects by architects, artists, designers and curators.

The Capital’s profile is set to change dramatically, with over 230 new towers due to be built over the next decade. Questioning whether this high-rise vision of London’s future is the right one for our city and its people, this hotly anticipated debate will kick off the festival. New London Architecture, Centre for London and London School of Economics and Political Science are hosting a major public discussion where experts will debate the motion ‘London Needs Many More Tall Towers’. Speakers include Paul Finch of the World Architecture Festival, Simon Jenkins of the National Trust and Evening Standard, Nicholas Boys Smith of Create Streets, Tony Travers of LSE, Rowan Moore of The Observer and Nicky Gavron from the London Assembly.

RIBA London are coordinating a trail of open studios through Shoreditch, Clerkenwell and nearby areas, with a programme of activities and events that offer behind the scenes access to over 20 practices. Experience model-making demonstrations, exhibitions, talks, films and home-brewed craft beer. Participating practices include Allford Hall Monaghan Morris, Coffey Architects, Hawkins/Brown, Hut Architecture, Milk Architecture, Say Architects and vPPR.

With Richard Sennett – Professor of Sociology at the London School of Economics and New York University and founder of Theatrum Mundi – and Charles Holland who was a core member of FAT (Fashion, Architecture, Taste) opening the discussion, this talk will debate the importance of conversation between architects, urban designers and the public. Looking at previously proposed public projects, such as the 100 Public Spaces programme initiated by Ken Livingston (and subsequently axed), the debate will look at areas of London, including the Southbank, Windrush square and Gillet Square, analysing the creation of civic space, and calling for a truer collaborative effort between architects, urban designers and citizens.

Best known to Londoners for his Nelson’s Ship in a Bottle exhibited on the Fourth Plinth in 2010, Yinka Shonibare MBE RA discusses, with Patrick Wright, how his thought-provoking works have been inspired by his experiences of the capital. Shonibare’s expertly crafted work confronts issues of race and class in a contemporary context. This is the first in a series of talks presented by the Royal Academy of Arts at the London Festival of Architecture.

Founder of the Memphis Group, creator of radical social housing projects and the iconic bright red Valentine typewriter, Ettore Sottsass is one of the great designers of the twentieth century. To celebrate the publication of a new monograph by Phaidon, Design Museum Director Deyan Sudjic will talk to Sottsass’s widow Barbara Radice, who travels to the UK for this event.

Moshe Safdie is an architect, urban planner and theorist, whose buildings are committed to responding to ‘human needs and aspirations’. He first came to the world’s attention in his twenties through his ground-breaking ‘Habitat 67’ project – a centrepiece of the Montreal EXPO. From this sensational launch pad, Safdie has since gone on to write, lecture, teach and build extensively in North America and in many other countries. In partnership with the BBC, the RIBA brings you an opportunity to direct questions to Moshe Safdie as he is interviewed by Razia Iqbal in London about the power of architecture, a humane approach to urbanism and the projects that have defined his global career.

NLA are offering an exclusive opportunity to enjoy a tour of several London towers by the very architects that have helped to shape the city. These intimate tours allow guests to gain access to the top of the Heron Tower with KPF and ARUP, the Willis Building with Foster + Partners, and see the historic views from the Balfron Tower and Centre Point.

The National Trust is organising Routemaster roadtrips offering passengers new perspectives on London’s distinctive neighbourhoods. The series sets out to explore the characters and cultures found in our capital city. ‘Road Trips’ kicks off with a tour of South London presented by architectural critic Stephen Bayley who will present his personal architectural highlights of one of London’s unique areas.

Open City is organising a sunset boat tour down the River Thames exploring the architectural landmarks that contribute to making London such a vibrant and dynamic city. The river cruise will look at the impressive mix of historic and modern architecture that makes the riverfront so architecturally diverse.

London Transport Museum presents a series of talks and tours around the city, which explore how London’s transport has responded to the themes of Human Capital and Capital Investment. From architect Charles Holden’s influence on the Piccadilly line in the early 1930s, to the design of Stockwell and West Ham bus garages, the tour will look closely at public architecture and how it has responded to the changing needs of an expanding, globalised city.

The 2014 Kingston Undergraduate Degree Show offers visitors a glimpse into the future of art, design and architecture, and a chance to meet this year’s students.

Alongside the yearly student summer exhibition, featuring the work of over 650 students, The Architectural Association (AA) is bringing to London Rainforest, an installation by Chilean/German GUN Architects. Installed in Bedford Square, Rainforest will feature suspended pyramidal fabric ‘stalactites’ above steel pools and seating areas. An exhibition in the main AA Gallery accompanies the pavilion and describes the development of Rainforest through earlier research by GUN Architects, the pavilion’s conceptual evolution and technical engineering. 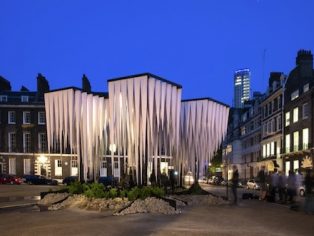