The London Festival of Architecture (LFA) has announced that ‘Power’ will be the theme of the next festival, taking place across London from 1 -30 June 2020.

The London Festival of Architecture is the world’s largest annual architecture event and celebrates London as a global hub of architectural experimentation, practice and debate. The programme is delivered by architecture and design practices and practitioners, cultural and academic institutions, artists and many others. The festival appeals to a huge public audience: in 2019 a vibrant programme of 566 events attracted over 800,000 people and reached a global audience of 138 million people, making the London Festival of Architecture one of the most important events in the cultural calendar.

Every year the London Festival of Architecture takes a different theme to inspire its programme of public events, and in 2020 will examine power from multiple perspectives. The London Festival of Architecture will open its call for entries in October, inviting anyone with an interest in London and its built environment to respond with ideas for events – from serious academic debate to activities for children, and everything in between.

“Today, the order of power is being destabilised, there is a sense that the general public are no longer just captivated by power, but instead, they want some of it for themselves. The power of protest is returning to the foreground of civic life, alongside a rise in populist movements.

“How can we better understand how the balance of power affects the built environment? Firstly perhaps, we need to question; who actually holds the power amongst the web of stakeholders? Does it lie with regulators, planners, landowners, designers or, is the public in ultimate control? Delving deeper we can also question, what is the driving force behind these stakeholders? Where are they taking influence from? And what do they actually want?

“London is one of the best examples of a global city, and it has a scale to match. As we continue build taller is there any truth in the maxim that skyscrapers are just phallic symbols, erected by men with a power complex – or are they a pragmatic answer to planning problems? The UK Government declared a ‘Climate Emergency’ in May 2019, is there room for imposing symbols of wealth and power in our new sustainable future?

“The theme of ‘Power’ opens questions about how we can better fuel our buildings. From fuel cells in basements to solar cells on roofs – where does our power come from and who’s going to be supplying it? Research points to the fact that the construction, operation and maintenance of buildings accounts for 45% of total UK carbon emissions. For architects, reducing the impact on the environment and biodiversity should be a priority, but are they paying lip-service to their concerns rather than taking in real action? Is there a willingness to make the tough decisions required to change direction or are architects sitting on their hands while our window of opportunity becomes smaller and smaller?

“As a society we’ve long been fascinated by the power and the melodrama of those who have it and those who want it. Perhaps still the greatest guide to power in the modern world, Niccolò Machiavelli’s ‘The Prince’, tells those in power that it is better to be feared than loved. Have architects lost their power because they want to be loved?

“Historically, those who have held power have made it as visible as possible. Leaders of all kinds – whether religious, regal, political or military – have often demonstrated their power by creating moments of disruption, and moments of awe within the urban realm. A walk through London tells a story of shifting power through its built form: the growth of commerce and the decline of historic power structures. In places that story becomes ambiguous: The Houses of Parliament for example, created as an embodiment of the British Constitution, are shrouded in scaffolding and can be seen as a metaphor for our uncertain and unstable times.

“In the workplace we have also seen power shifts, with companies paying closer attention to the way power is distributed along lines of class, gender and race. The LFA’s own Elephant Campaign has drawn attention to how an imbalance of power is a cause of the discrimination and poor behaviours that continue to blight the built environment professions. Despite these moves, throughout society there is still a lot of work to do to challenge preconceptions that still exist about who deserves to hold power, and the importance of feeling empowered.

More information on the London Festival of Architecture is available at www.londonfestivalofarchitecture.org 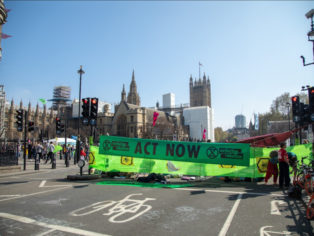