Forming an unmissable addition to the London Festival of Architecture’s ongoing season of events and installations and the City of London Corporation’s outdoor arts programme, Liminal – a major new artwork next to the Thames created by Wolfgang Buttress – has been unveiled opposite the Tate Modern on the north bank of the Thames. The award-winning artist’s site-specific installation is the result of a design competition organised by the London Festival of Architecture and commissioned by the City Corporation, as part of its outdoor arts programme, Fantastic Feats: the Building of London.

Drawing upon the mysteriousness of the Thames that has inspired generations of painters, from J.M.W Turnerto Claude Monet, Liminal brings together art, architecture, landscape, science and sound in a unique experience that speaks to both its setting and the curiosity of visitors.

Tapping into the Thames’ ethereal qualities which are rarely seen from its surface, the artwork encourages the public to view the river through a mercurial and kaleidoscopic lens, creating an ‘architectural painting’ of the river and its context. With this, Liminal blurs the boundaries between 2D and 3D, using a variety of mirror, satin and matt aluminium panels to focus and alter viewers’ perception and experience of the river.

The 4.5-metre-high sculptural installation delves further into the Thames’ depths using sonar data, to encourage real time connections between visitors and passers-by with the water. Liminal will include a downloadable app of the same name– designed by Wolfgang Buttress in collaboration with Hoare Lea – which will be connected to a sonar buoy. This will express the real time movement of river life and currents, sourced directly in front of the sculpture, as light and sound.

Shaping an emotionally engaging experience of the water, the fascinating artwork encourages greater public interaction with what many see as London’s biggest physical boundary, the Thames, as it inspires people to pause, reflect and experience the power and beauty of the river.

Having been brought to the capital by barge, Liminal will now be enjoyed by a huge public audience as part of the Festival’s growing, year-long presence. The installation is also a key viewing point for Illuminated River, the world’s longest public art commission, the first phase of which was launched this summer across London, Cannon Street, Southwark and Millennium bridges. Fantastic Feats: the Building of London, the City Corporation’s six-month programme of public events (31 May – 1 December), includes Liminal in its celebration of London’s long-standing history of architectural and engineering firsts, which will examine how these innovations have contributed to improving the lives of Londoners over the centuries.

“A truly fascinating and imaginative take on the mysterious depths of the river, we’re delighted to see Wolfgang Buttress’ immersive installation sitting pride of place on the bank of the Thames, reconnecting visitors with arguably one of London’s largest boundaries. At the London Festival of Architecture, we strive to champion new perceptions of the familiar, and it’s been brilliant to see how Liminal does just this, capturing the river’s life, activity and secrets through a whole new lens.”

“Liminal expresses my first impressions of the river and suggests the life, mystery and activity that lies beneath it.”

Alastair Moss, Chairman of the Planning and Transportation Committee at the City of London Corporation, said:

“I’m delighted to see the fantastic Liminal has been unveiled. It’s exciting to have such a magnificent artistic installation on the Thames Riverside Walkway, connecting people to our capital’s iconic river. The City has evolved for nearly two thousand years so upgrading our public realm offer has always been an ongoing priority. We want to encourage creative uses of space that can be enjoyed by workers, residents and tourists across the Square Mile.”

“One of our aims for Illuminated River was to open up the riverside and create more engaging areas for public use. This installation by Wolfgang Buttress is an excellent extension of this thinking and will help to define the riverscape as a renewed civic space” 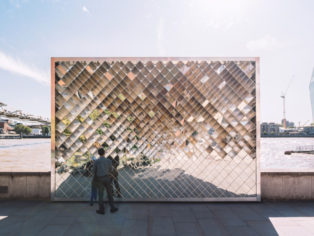 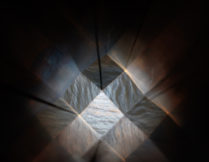