Architecture and design students, recent graduates and emerging practices from across London are invited to submit a bench design to enliven the public realm of the City’s Eastern Cluster and Bank area. As many new developments including several new towers emerge in the district, the benches will accommodate the increasing numbers of people using its streets and spaces, and enhance the urban environment.

Entrants are invited to submit their proposal by midday on Thursday 19 April 2018. The call for entries document containing detailed submission and entry criteria is available at www.londonfestivalofarchitecture.org

City Benches aims to showcase and give exposure to emerging architecture and design talent in London.
For George King, designer of Zombie Bench (pictured) and winner of an earlier London Festival of Architecture competition in 2012, the opportunity was a breakthrough moment for him as an architect. He explains:

“Zombie Bench was my first competition win and was the perfect opportunity to design something on a scale that was fun and experimental, yet buildable and functional. It allowed me to think about the qualities I am interested in as an architect and distil them into a small object which still provokes debate to this day.”

“City Benches is a fantastic project that will not only enhance one of the City’s most architecturally exciting districts, but will help the London Festival of Architecture showcase the capital’s brilliant emerging architecture and design talent. We’re very grateful to the City of London Corporation for sharing that vision with us, and for giving emerging talent such a prominent and public springboard.”

“The City has evolved for nearly two thousand years so upgrading our public realm offer is an ongoing priority.”

“The City is growing rapidly with 1.37 million square metres of office space under construction, which has the potential to accommodate 85,000 workers. The Bank area is one of London’s most iconic junctions and 60% of the City’s growth expected to be delivered in the eastern cluster.”

“Projects such as the City Benches competition will provide young talent with the opportunity to be a part of that evolution and helping the City remain an exceptional place to live, work and visit.” 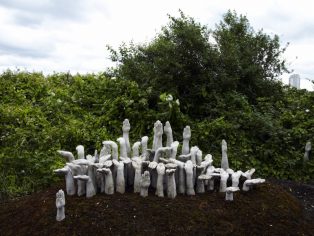