The London Festival of Architecture 2015 (LFA) programme is now live. With an expanded international programme, in direct response to recommendations made in The Farrell Review, the festival aims to highlight the diverse influences that inform London’s architecture.

Returning in 2015 with a truly international flavour, this year’s programme is led by the appointment of Ireland as the festival’s International Focus Country. As a result, two temporary pavilions produced by Irish Design 2015 will be built in King’s Cross, along with an immersive installation at the Design Museum. The programme also includes a variety of events such as the Serpentine’s 15th annual summer pavilion designed by Spanish architects SelgasCano, and programmes from World Architecture Festival London (WAF) and Commonwealth Association of Architects (CAA).

“We are delighted to present this year’s festival programme. With an expanded international offering, the festival will deliver a fascinating range of events from talks to tours, exhibitions to workshops, taking place across London throughout June.

The capital’s architectural talent is part of its success story, and it is for that reason we are expanding the festival’s international reach, to celebrate, and amplify, the creative and technical talent that resides in our city.

One common thread linking all the offerings in the programme is their response to this year’s theme – Work in Progress.  Through the festival, we have offered people a chance to explore the changing nature of work, and workspace, but also its impact on, and role in, the evolution of London. After all, London exists because of its commercial roots, as a place of production, the exchange of goods and services.”

For LFA, ID2015 will present the first instalment of New Horizon_architecture from Ireland (1 – 24 June) – a yearlong initiative backed by the Irish government exploring, promoting and celebrating Irish design throughout Ireland and internationally.

For the London instalment as part of LFA, the Irish designers include TAKA, Clancy Moore, Hall McKnight, Steve Larkin and Emmett Scanlon.  This collaborative project seeks to explore in detail the theme of the festival, “Work in Progress”, at a city scale, resulting in two pavilions in Cubitt Square King’s Cross, and one installation in The Tank at the Design Museum.

In King’s Cross, the Yellow Pavilion will explore how the phenomenon of the city is assembled from individual pieces, while the Red Pavilion will explore architecture’s role as a background to the activities it contain. Both pavilions will play host to talks, performances and collaborations with other emerging creative talents in contemporary Irish design culture.

The Design Museum will present Emmett Scanlon’s Nine Lives, an exhibition that will discuss and explore the space between architectural production and consumption. The exhibition will curate the work of the nine practices selected for the New Horizon_architecture from Ireland programme, from the projects’ architectural progression to the everyday lives of their occupants, providing a unique insight into the social lives of contemporary Ireland.

“We are extremely honoured that Ireland has been selected as the inaugural Focus Country for London Festival of Architecture and we look forward to working with the festival team in promoting Irish businesses working in the architecture and built environment space as one of the highlights of the ID2015 programme. New Horizon_architecture from Ireland takes its inspiration from important thresholds in the history of contemporary Irish architecture, where the scope of this work is drawn from both Irish and global design culture. It looks to a better future.”

Other international highlights will include a talk looking at international case studies of industrial rejuvenation, The Working City – Eindhoven, New York and London (18 June, 5.30 – 8.30pm). This seminal talk will provide an opportunity to hear from rejuvenated industrial places in two international cities, as well as London, that are in the process of providing innovative, inspiring and real solutions for new ways of working and living.

A free exhibition by World Architecture Festival (24-27 June) will showcase great buildings, future projects, interiors and landscapes from countries around the world. New to LFA for this year, an exhibition at Olympia Central, VISION London (2-3 June, 10am-5pm)will present an annual opportunity for architects, specifiers, clients and supplier communities to come together to discuss, debate and showcase the latest innovations and developments in architecture, design and the built environment.

In partnership with RIBA, Commonwealth Association of Architects (CAA) will mark its 50th anniversary with an international conference, Designing City Resilience (16 & 17 June, 8.10 – 5.30pm). The conference will help to create greater inter-connectedness, break down barriers and improve communication between all those involved in city resilience. 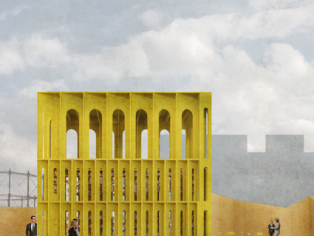