The London Festival of Architecture (LFA), now in its 10th year, celebrates London as a global hub of architectural practice, discussion and debate. Taking place throughout June, this year’s festival will explore the dynamism of the UK’s capital city, and its economic driver, through the central theme: CAPITAL. The concept of ‘capital’ will serve as a spring board for a broader examination of its different manifestations, from London’s role as a cultural capital, to the ways in which human, natural, social and digital capital shape London architecture and its public spaces.

LFA partners, The Architecture Foundation, British Council, New London Architecture, and RIBA London, together with Chair Patricia Brown, will be joined by a wide range of cultural and professional organisations, including The Barbican, Museum of London, National Trust, Royal Academy of Arts, Serpentine Galleries, Sir John Soane’s Museum, and V&A, staging a multitude of installations, exhibitions, citywide tours, performances, local interventions, and public debates all across London. From cultural explorations of London led by key personalities, to one-off access to the tallest buildings, exclusive previews of the hottest new projects, an exciting public vote for London’s best new building, and star architects showcasing their latest achievements, this year’s festival offers a vibrant programme for every architecture lover. The Berkeley Group and the Mayor of London are once again generously supporting the London Festival of Architecture.

This year LFA is also presenting a call for associated projects by independent practices, designers, artists and curators to form part of the 2014 edition. Details are available on www.londonfestivalofarchitecture.org.

The full programme of LFA events will be listed on the London Architecture Diary from May. www.londonarchitecturediary.com

Unprecedented access to tall buildings will be offered in Capital Views (Wed 4 June), a series of tours led by architects and developers of the towers that are changing the skyline of London. Organised by New London Architecture (NLA) as part of the exhibition London’s Growing…Up! (3 April – 12 June).

RIBA London’s Open Studios & Trails will return for LFA, with a collective of practices and RIBA members responding to the theme ‘capital’ through a series of open studios, activities and events. RIBA Open Studios Trails will feature specially curated walks, taking visitors to practices and creative studios in Shoreditch (5 June) and Fitzrovia (28 June); the walks, led by architecture experts, will provide an insight into the ways in which architects and designers work. Great Titchfield Street Festival will also return on 28 June. The street will be brought to life by architects, engineers and local businesses.

The Museum of London will reveal House of Muses, a new temporary structure commissioned in partnership with The Architecture Foundation, on 6 June. The innovative and playful structure will allow visitors to share their views on the Museum’s future transformation plans and will be accompanied by a programme of evening and weekend events throughout the festival.

International Architecture Showcase: The British Council is inviting International and London based architects to participate in a series of residencies organised in collaboration with London’s embassies and cultural institutes. Situated around Ernö Goldfinger’s brutalist icon the Balfron Tower and the Poplar neighbourhood, and in partnership with Bow Arts Trust, these collaborations will explore the influence of émigré architecture on London and will be accompanied by a series of public events and presentations.

The National Trust is offering a special late evening opening of Ernö Goldfinger’s unique Modernist home in Willlow Road and tours of another Modernist landmark of Hampstead – Welles Coates’ Isokon building and the Isokon design company.

Thomas Heatherwick and Dan Pearson will present their proposals for the Garden Bridge in their first public talk together (26 June). This will take place as part of a series of talks, events and walks (26 – 29 June) staged by leading investigative contemporary arts organisation Siobhan Davies Dance which will explore the theme of natural capital.

The Architecture Foundation will host a headline symposium on housing featuring a wide range of expert speakers exploring the origins of the housing crisis and potential solutions for the future.

The Architectural Review’s House Awards competition, celebrating creativity and innovation within housing design, will be accompanied by a conference (18 June) examining how the living space is being recast to address new challenges. Leading architects, critics and patrons will reflect on the complex and shifting relationship between architecture, society and ecology, and offer compelling new perspectives.

The V&A will run a special Friday Late (27th June) entitled It’s All Yours, during which architects, artists and designers will create a series of installations re-contextualising the V&A’s collections around the idea of ‘public’ and highlighting the relationship with, and the role of, the public citizen.

One of the most anticipated cultural events of the year, Serpentine Galleries’ annual Pavilion will return (26 June – 19 October) with a commission by Chilean architect Smiljan Radic. With a footprint of 350 square metres, the Pavilion will depict a semi-translucent, cylindrical structure, designed to resemble a shell, resting on large quarry stones. A flexible space for visitors to interact, the Pavilion will play host to a series of events and late nights.

The National Trust is organising a series of guided Routemaster bus trips around London, led by authors and key personalities living in the capital’s different areas, including architectural highlights of South London by design critic and author Stephen Bayley (7 June).

There will also be architectural tours by boat, bicycle and on foot, including walking tours by Blue Badge Guides and the Transport Museum’s walking tours of Piccadilly line stations as examples of British Modernism.

With over 200 towers, each more than 20 storeys high, currently planned in London, New London Architecture, London’s Centre for the Built Environment, will explore the vertical growth of the city in an exhibition entitled London’s Growing… Up! (3 April – 12 June).

A highlight of June is always the Royal Academy’s famed Summer Exhibition (9 June – 17 August) and its inspiring Architecture Room, this year selected by Eric Parry RA and Sir Richard MacCormac RA. The Royal Academy is also putting on Looking at London, a series of talks exploring different viewpoints of the city, including speakers from a range of cultural backgrounds, such as Yinka Shonibare RA, Ian Martin, Patrick Keiller and Lisa Jardine.

Degree shows by leading architecture universities, such as The Bartlett and the Architectural Association, will offer the chance to see the work of the next generation of architecture talents being nurtured in London. 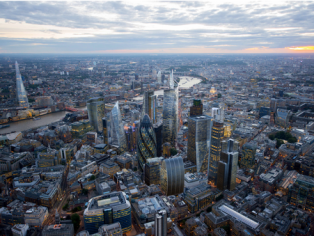 London is Growing Up…© Hayes Davidson