London-based architectural practice TwistInArchitecture – founded on the principle of creating buildings with an unusual twist – today unveiled its latest completed project: a loft conversion which bucks the trend of homeowners who are “blindly clawing” for every available meter squared when they undertake renovation projects, in favour of using existing space and floorplans in more intelligent ways, to suit specific user needs.

The practice explains how its recent loft conversion on Clapham Common (South side) did not have a traditional ‘dormer’ added to the roof simply to cram in a small additional room and awkward staircase, but instead saw the creation of an open floorplate with a ‘hanging gallery’ and spiral staircase, which appears to be floating in the middle of the study. This was achieved by removing the existing loft floor structure and demolishing all walls at mansard level, delivering a spatially interesting solution, while adding approximately 15 meters squared of functional and usable space.

The project reveal comes at a time when house price rises in London are leading to increasing numbers of domestic redevelopments and extensions being built to maximize values.

“More and more we see the prevailing trend in residential alterations to grab every possible meter squared, resulting in bastardised and awkward spaces which people can’t even use properly afterwards. Clearly this is being driven by London’s housing market, and limited stock of period buildings in particular, but it is short-sighted and counter effective. We aim to provide our clients with smarter solutions, which are more usable and practical, based on the logic of extending and converting spaces more intelligently.”

Beric also points to the fact that architects have a responsibility to develop a design idea at the outset, which can be built without compromise, regardless of any obstacles which arise.

“We can say, with much pride, that the architectural idea behind the project remains intact from the teaser sketch, to the visual, and further to build reality, obviously with full support by our client.”

“For the Clapham project we wanted to take what looked – at first – like an ordinary project, and design something beautiful that both looked good and cleverly utilised the space. We did this by combining the ultra-modern with the site’s Victorian heritage, style and decor, via the sweeping ‘growing’ spiral staircase, which stands on a mere needle on the floor. The staircase is modelled on the spiral at the right hand side. . It is a golden ration, and derived from the number Pi, which was considered perfect in ancient times. It was our way to stay in the classical and decorative Victorian style, while being faithful to contemporary architecture and clean forms. For the same reason the gallery structure is black – to emulate Victorian ironwork. The growing form of the spiral was used to blend the staircase into the gallery so we achieved seamless joint.”

However the project was not without its challenges.

“It is in a conservation area, meaning we could not move the existing ridge due to the planning conditions, and as there was a history with unsuccessful planning applications, we wanted a solution that did not involve a lengthy process, whilst ensuring the clients would get what they need. Limited head height in the loft was also constraining the usefulness of a potential dormer towards the rear, and as they required one large space rather than one more bedroom – that solution was out of the question.”

“Too often we see London projects where clients are blindly clawing for every available meter squared, so we are pleased to have been able to challenge the typical solution, and prove that space can be enlarged in an aesthetic way, while also maintaining smooth planning processes and fulfilling clients’ needs.”

The project was delivered by TwistInArchitecture acting as designers and lead consultants, and Tall Engineers acting as the structural engineers. 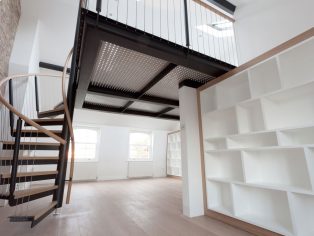