London Bridge achieves building of the year at AJ100 Awards

The redevelopment of London Bridge station has won the prestigious ‘Building of the Year’ accolade at this year’s AJ100 awards held at an exclusive gala dinner and awards ceremony in the Tower of London on Wednesday 19th June 2019.

Designed by Grimshaw Architects, and containing striking architectural metalwork manufactured and installed by SAS International, London Bridge station was the ‘natural winner’; commended for its sustainability, ingenuity and modest grandeur.

Judges praised all those involved in the design and installation, using the project’s superior design and delivery as an example of construction at its very finest. The judges celebrated Grimshaw’s original design, explaining it ‘reconnects the tissue of the city’, in what has now become a core civic environment for London’s population.

Grimshaw Architects were also recipients of the ‘Practice of the Year’ award at the AJ100 ceremony. The UK’s largest architecture awards, the annual AJ100 awards honour excellence in architecture. This year’s ceremony was attended by over 500 architects, clients and industry figures, in what was a jubilant evening for all. 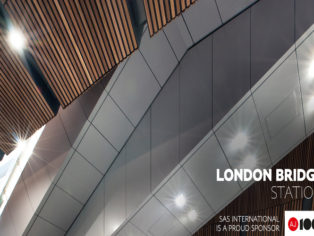