On 13th June, Levitt Bernstein will host an event in collaboration with local artist, A Labour of Love, and industry homelessness charity CRASH.

his large-scale art installation in the courtyard at the front of Levitt Bernstein’s Dalston studio will explore hidden stories of homeless people within our capital city alongside Levitt Bernstein’s own research on mixed communities.

The event takes its influence from this year’s London Festival of Architecture theme of ‘a work in progress’, exploring the efforts going into addressing these issues both through the design process at an architectural level, and also through the work of the industry’s charity.

The medium used for the installation will be cardboard, a material synonymous with its use on the streets as a barrier from the cold.

The upended cardboard city we are creating will be a map depicting themes explored in Levitt Bernstein’s research, coupled with the experiences of those who have been most affected by the housing crisis – the beneficiary group of the charities that CRASH supports.

Along with CRASH, Levitt Bernstein will be working closely with Kairos Community Trust, a charity which is dedicated to helping homeless men and women with drug and alcohol problems. Some of these homeless people will be sharing their stories whilst helping to build the installation.

Exploration of and interaction with the piece will allow the viewer to discover these real life stories, facts and figures as they tumble out of cardboard city.

Arrive hungry, as local café Subtitles will be serving food and drink in the courtyard all day, with donations going to Kairos Community Trust. 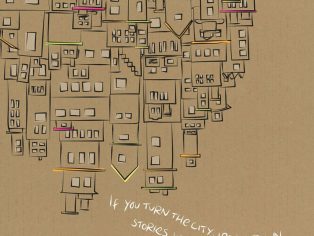