A redundant Bedford church has been converted to a theatre that serves both a school and the local community. Mark Smulian reports.

Church building was widespread in more pious ages than our own and nowadays the number standing can exceed the needs of worshippers, leaving some fine local landmarks redundant.

Many become residential conversions, but in Bedford St Luke’s Moravian Church has become a theatre for both Bedford School and the public. Named the Quarry Theatre after a school benefactor, the redundant listed church and adjacent minister’s house now provide a 200-300 seat galleried courtyard theatre, and a smaller studio theatre together with a bar, foyer, dressing rooms and office space. Architect Tim Foster, of Foster Wilson Architects, has a lengthy track record in theatre work.

At Bedford he found the church and minister’s house were the survivors of what had been a small settlement built by the Moravian sect.

The school adjoins one side of the buildings and a busy road the other, meaning that two main entrances were needed. Foster says:

“We were appointed through a competitive process in 2009 when the school had acquired the redundant church and saw the opportunity to create a theatre that would also serve the community.”

The church was listed at Grade 2 but it was obvious that some extensive adaptations would be needed, and this required considerable historical research by the architects to establish what features were original.

It turned out a chapel had been built in the mid-18th century, superseded by a larger church in the mid-19th century that was in turn later modified to add a vestry, a chancel to house the organ and later a church hall.

“The challenge was how to adapt it. There is often a misunderstanding about listing where people think it means you cannot change anything, but you can if you do it in an appropriate way.

“One of the arguments for conversion of this kind is that you are giving a building a beneficial use, so if done sympathetically the authorities will often allow some change.”

In consultation with the local conservation officer and Historic England, the church was changed quite significantly, including the insertion of a steel frame structure inside the main space, but most of the original windows and decorations were retained as was the original gallery and organ screen, although the organ’s working parts had been previously lost. Foster explains:

“The house, church and vestry were not larger enough to accommodate the brief.

“Also, it was to be used partly for teaching and partly as public theatre so that imposed various demands.

“The need for front doors from the town and the school was one of the planning issues we had to solve.”

It was decided not to alter the exterior facing the town. The church had two principal doors either side so Foster decided to use one of these, situated roughly in the centre of the combined frontage of the church and minister’s house as the theatre’s main entrance from Bedford.

“One of the difficulties was a stone staircase sitting inside that lobby, one of two symmetrical ones that provided access to the gallery, which meant access through the building to the vestry would have been only about 800mm wide, so one of the more controversial things we had to get permission for was to remove one staircase to increase that to two metres, which is still not terribly wide.”

A further issue was that a 1970s church hall was attached to the old vestry which completely blocked rear views of what Foster calls “the rather pleasant 18th century elevations of minster’s house”.

Old engravings were found in the course of researching the heritage statement that showed views from minister’s house to the church gardens at the school side,

“so we argued that the church hall, which had been converted to classrooms, should be demolished to open up view of minister’s house and allow a new entrance from the school side to vestry.”

The minister’s house appeared to have three small bedrooms upstairs, unsuited to any of the theatre’s purposes, but again historical research came to the rescue when drawings were found that showed this was the original congregation meeting room and had been subdivided later,

“so on that basis we made an argument to take old rooms out and go back to the original, which gave us an ideal room for the studio theatre for teaching and rehearsals”, Foster says.

Stairs and a lift have been installed to take patrons from the vestry foyer up to the studio and audience gallery level. Foster says his design

“evolved around the form of the existing chancel so we have this radiating space that allows you to see the chancel above it with a wall of glass that looks out over the garden other side”.

The design allows actors to get through the back of the stage area to appear from the opposite side from the dressing rooms without being seen by the audience,

This foyer is markedly different to the original church and minister’s house but Foster says:

“An extension to a listed building need not be a pastiche, it can be a modern addition if its appropriate in scale and materials.

“It wraps around the existing building and uses good quality materials, a zinc roof and Bedfordshire Gault brick at base and glazing and timber in between, so you can still read the original building above it.”

Within the main theatre space the original balcony was kept, though with seating re-tiered to improve views of the stage, and the steel frame was inserted sitting inside the original structure. There are two levels of side galleries, the lower one for the audience and the upper for lighting and other technical equipment with a technical control room above the balcony supported on the steel frame.

Lighting bars and suspension bars are above the stage on winches and a tension wired grid allows technicians to walk above the audience to access equipment without the risk of falling as it takes up the entire width of the space.

“Safe access to lighting is important particularly in schools where students are learning technical theatre and the grid is like a floor,” Foster says.

Plant is housed in the roof void above this upper tier, a tricky operation that required it all to be threaded through the original timber trusses.

There are three banks of movable seating that may be retracted to give a large flat area for teaching or non- performance events.

Unlike most theatres, the stage is not raised but flat with the audience in the tiered seats.

It’s plainly impossible for a conversion such as this to meet modern sustainability standards but Foster says the old church’s performance has been improved.

A theatre needs to be protected from intrusive external noise and since the Quarry is on a busy street the original church windows were kept but their acoustic performance improved by secondary glazing.

The building uses low energy lighting and where possible insulation levels have been improved.

For example, the roof had to be replaced as the slates were time expired and the opportunity was taken to heavily insulate it.

The original floor was discarded “as we found it was sitting on very little” Foster says.

A concrete floor was installed to allow for a greater thickness of insulation and above that a semi-sprung timber floor of plywood on rubber strips “because it’s not good to act or dance on concrete”.

“very supportive as they recognised that to convert a church into a theatre that retains it as single space was a much more appropriate than other things that might have happened to it like conversion to residential units.

“There were a number of things that needed permission and we did have to remove certain items from the church like pews and the pulpit.

“From the town side the building is virtually unchanged though it has been cleaned lightly, as there is great danger with conservation that you over-clean something and spoil it.”

Stippled glass has been removed from the front to make the interior visible but unlike most theatres the Quarry does not have its name up in lights, nor those of productions and performers.

Its name appears in a wrought iron arch at the entrance and notice board next to it advertises productions.

What its 18th century non-conformist founders would have made of a theatre in their buildings is a matter for conjecture but a worthwhile use has been found for a historically interesting building. 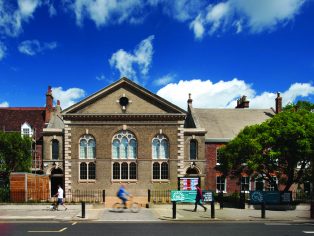 Auditorium from the stage © Philip Vile 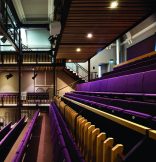