Caddick Developments, the company behind the £400 million Trinity Leeds shopping centre, is to invest more than £300 million to regenerate the centre of Leeds, creating a new scheme branded as SOYO, with the opportunity for this identity to be adopted by the wider neighbourhood.

SOYO will also create hundreds of new homes, restaurants, bars, commercial space for start-ups as well as a hotel and new public space, which the developer hopes can be used for outdoor theatre and music events, attracting local bands and artists.

Caddick Developments has been engaging with neighbours across within the cultural quarter about collaborating more widely under the SOYO brand with a vision of pulling everyone together to help more powerfully define this area of  the city centre. The company is also launching a website, newspaper and social channels promoting activities and events.

High quality rental housing will form a key part of the SOYO vision, with 515 apartments purpose built for rent delivered by Moda Living. Designed by award winning DLG Architects, homes will be spread across two 16-storey blocks and the twin buildings will include 9,000 sq. ft. of commercial space, which could be on site from Spring 2018.

Caddick Group is one of the biggest landowners in Leeds city centre and has delivered some of the region’s biggest developments, from Vanguard Retail Park  in York to Crosspoint 33 distribution centre outside Wakefield as well as Trinity Leeds. The company also owns the development land at Leeds Valley Business Park and the City One site in Leeds South Bank, and is currently spending £40 million revamping Leeds stadium.

“There is a huge amount happening in this area of the city. As well as delivering our own scheme under the SoYo name we are working alongside our neighbours, from the West Yorkshire Playhouse and Leeds City College to Yorkshire Dance and Northern Ballet, with the idea of using this  opportunity to create a wider place identity.  Building on the vast cultural heritage of this area is something that has been central to the SOYO plan from day one.

“Our high quality public realm will provide a much-needed pedestrianised area in the city centre for the city’s residents to enjoy all year round, which is key in developing a strong community feel.”

“With the launch of SOYO, Caddick is helping strengthen the identity of the city’s cultural heart as an exciting and diverse place to be – at a time when the area is set for so many new developments, including the Playhouse’s own redevelopment.”

“Yorkshire Dance is delighted to be playing its part in SOYO. This is a tremendously exciting consolidation of the work done by the arts organisations on Quarry Hill to make this a thriving cultural quarter. We’re looking forward to ever-closer relationships with our neighbours, old and new.”

“It’s fantastic to see this exciting next chapter for Leeds’ cultural quarter  – and we’re delighted to be a part of it. It can only strengthen the cultural fabric of the city and we’re looking forward to working alongside our neighbouring organisations to cement Quarry Hill as the destination for culture in Leeds.”

“We’re delighted that Caddick’s £300m SOYO scheme will shine a spotlight on this area and help us shout about the amazing current of culture we have and the quality of life offered for young people studying here, whatever their background and wherever they are from.”

“Being part of the SOYO masterplan presents a unique opportunity to deliver a Moda development in the cultural heart of Leeds that benefits from existing high-quality occupiers and neighbours. With over 500 professionally managed apartments, our SOYO development will go some way in providing much needed new housing in the city centre that will be crucial to attracting and retaining talent –key tasks for England’s regional cities.” 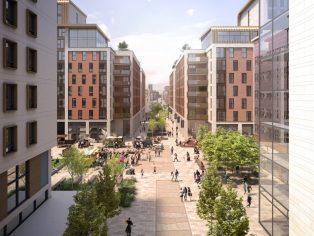 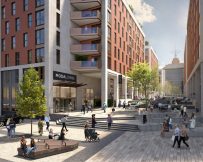 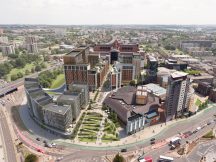