Lee Evans Partnership LLP has been appointed by The Land Trust to lead the redevelopment of Fort Burgoyne in Dover.

A Scheduled Ancient Monument, Fort Burgoyne was originally constructed in the 1860s on high ground behind the strategically important Dover Castle as a strategically-positioned defensive installation which could be used to help repel a potential invasion of Britain from the Channel. Although never utilised for its intended purpose, the building served as a key defensive fort, particularly during the two major conflicts of the 20th century. The site remained in military ownership until 2006 when it was acquired for regeneration by Homes England. Control of Fort Burgoyne and its associated land was transferred to The Land Trust in 2014. The Trust have worked to find a suitable long-term use for the site.

LEP’s design proposal will allow this hidden fort and its grounds to be opened up to the public for the first time in more than one hundred and fifty years.

The condition of the fort’s various buildings and structures has suffered a significant decline in recent decades. With a vision to make the site publicly accessible, a programme of stabilisation and conservation works has been identified which – in close consultation with Historic England – will create an attractive heritage environment for visitors while sympathetically conserving the important fabric of the structure.

The Land Trust, an independent charity, is leading the way in establishing new, sustainable approaches to the management of open spaces in conjunction with local communities. Their vision is ‘to improve the quality of people’s lives by creating, improving and maintaining sustainable, high quality green spaces that deliver environmental, social and economic benefits’.

Alongside the work on Fort Burgoyne itself, Lee Evans Partnership will also be collaborating closely with Dover Arts Development (DAD) and Charles Holland Architects to create a dedicated arts provision at the West Wing Battery area of the site, which will draw on the ideas, skills and knowledge of the local community.

“The site presents us with many complex challenges, particularly because there has been no significant renewal or upgrade work to the fort since it was originally built. Our heritage team has looked closely at the history of the site and examined the complex issues relating to the military use of Fort Burgoyne over nearly a century and a half. It is a structure which has acquired layers of historical detail over the years, all of which require understanding and unpeeling. We believe that our proposal – once completed – will deliver a real asset to the local community in Dover as well as becoming a key ‘living’ element in Kent’s defensive history.” 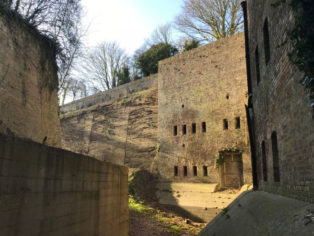 South-western side of caponier within the ditch

Remains of self-seeded undergrowth within the West Battery

Southern caponier from the ditch (Caponier (caponniere): A casemate which projects out into the ditch of a fort, allowing flanking fire. Also a passage for communicating with the outworks) 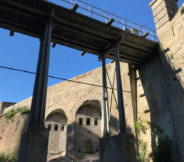 View from the southern ditch looking below the main bridge

Photo looking north from within the eastern ditch