Heritage professionals are focused people. They are much more likely to be interested in having an accurate drawing on which to base their works than in the process which lies behind developing that drawing. However, as laser scanning becomes more commonplace it is vital that we take a moment to grasp this concept, as it will increasingly affect how we appreciate and approach heritage work and design.

Radically different from previous techniques, laser scanning is a key development for the historic practitioner because of the opportunities it offers in the capture of detail. Today’s surveyor is now likely to be equipped with just a tripod-mounted scanner, which spins at very high speed while a low-energy laser fires a reflecting beam with extraordinary precision, recording just over 1 million points a second. The density of these is adjusted according to the purpose of the survey, with a typical lateral spacing of 1-3mm. There might, for example, be 20 million points in a survey of the front facade of a modest Grade II listed cottage. The tolerance of the position of each point is typically 1-2mm.

The scan collects large volumes of data which are then downloaded and processed to create what’s known as the ‘point cloud’, using software such as Cyclone™. The point cloud might typically contain between one and ten billion points that describe the building surfaces inside and out.

Laser scanning provides a new approach for the historic building specialist and therefore a new way of visualising and exploring historic fabric. When considering large building volumes and spaces where detail at height is important, such as cathedrals, tall facades and historic civil engineering structures, the benefits are significant.

With laser scanning there is usually no need to gain access at height in order to register their dimensions. The precise shape of a historic vault, or the shape and condition of decorative stonework, can all be measured from ground level with great accuracy. Detail can be reproduced by the surveyor at large scale (1:5 or even 1:2 if necessary) with a tolerance equal to or better than that obtained by close physical measurement. Laser scanning also allows for inspection in low light as the process is not dependent on the human eye, and is particularly suited to recording highly irregular surfaces that would previously have been difficult to accurately assess, such as timber frames and medieval stonework.

Securing the future of historical projects – BIM and 3D

Laser scanning arguably adds greatest value when it is delivering accurate 3D representations of complex historical buildings. The use of Building Information Management (BIM) is often now a necessary component on many projects. When existing building fabric is to be repaired or modified, laser scanning provides the key by which survey data is pivoted into the model. By surface modelling from the point cloud, a historic building can reappear in reduced, filtered, and rendered form in the 3D drafting model, yielding very considerable benefits in terms of fit and visualisation.

Further, as scanning provides a highly accurate contoured surface of buildings and structures, by repeating a scan over time, three dimensional movement in the surfaces can be detected. This provides a powerful tool for monitoring structural behaviour, given that it can be achieved without physical access to the walls. Contours (or ‘isopachytes’) can be produced using a program such as Geomagic™ that shows the difference in movement. This technique can even be used at the sub-millimetre level to record the decay in surfaces such as brickwork, using a more sensitive group of laser scanners that operate on the principle of triangulation.

Laser scanning is thus crucial in ensuring any restoration work can be done with full consideration of all potential movements and changes within what may be an extremely old building or structure. The manipulation of the cloud by drafting platforms has progressed significantly in the last two years, and cloud data is now imported directly into models by the industry standard package REVITTM, making representation of historic building fabric on office PCs even easier.

The future of laser scanning

The use of laser scanning for recording and archiving is now well established and English Heritage (EH) has produced good guidelines for the professional. Concern has been expressed in the past over such methods because of the stability of the electronic archive, but this issue has been largely addressed by the National Monuments Record. EH has commissioned a comprehensive laser scan of both Stonehenge and Ironbridge, and further recording of significant site is in progress.

Survey companies have moved rapidly to embrace laser techniques because they reduce both the costs and the risks associated with site work. This is accompanied by a significantly greater and more accurate level of detail. The result is all positive for heritage professionals: it allows them access to more information for the same money, thus ensuring design decisions are made with the greatest sympathy to the existing fabric.

By James Miller, Technical Director of Cultural Heritage at Ramboll 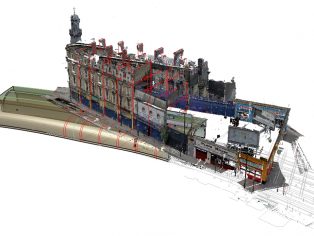 ‘Point-cloud’ produced through laser scanning of the Grade II listed Lighthouse building at Kings Cross, including the Metropolitan Line running beneath it – of which laser scanning enabled the creation of an accurate, single model of the two.

‘Point-cloud’ produced through laser scanning of the Grade II listed Lighthouse building at Kings Cross, including the Metropolitan Line running beneath it – of which laser scanning enabled the creation of an accurate, single model of the two.