One of Britain’s biggest zero carbon schemes, PortZED, has been given planning permission by Brighton councillors despite fierce opposition from local residents.

Residents claimed that building on such a high profile site on the seafront would destroy their sea views and open the floodgates for further tall buildings to be built.

PortZED includes six blocks up to five storeys high, containing 52 flats, a visitor centre, shops, offices and a café as well as parking for 66 cars and 118 bicycles.

The mixed-use project is the gateway development to Shoreham Harbour, the growing port serving Brighton and the wider Sussex area. The 170-acre port, which includes a three-mile waterfront, is the biggest brownfield site in the south of England and regarded by some as Brighton’s Docklands. In granting this scheme permission, Brighton planners have unlocked the door for major redevelopment of the whole of this end of Shoreham Port. The Port has always been zoned for redevelopment and a dedicated development brief has been prepared but until now the two local authorities and the Port authority have not been able to facilitate a viable development to come forward. There is a wealth of opportunity for construction professionals, developers and investors to get a foothold within the port and be part of this major redevelopment opportunity.

The PortZED project’s sustainable approach – it is a code 6 development – means no energy bills at a time of growing concern about rising prices and fuel poverty.

The ZED element of the name is short for zero energy development and echoes the name of the BedZED scheme in London.

It also shares the same architect, with the internationally renowned Bill Dunster aiming to take his pioneering ideas to the next level.

“This is an opportunity for development partners to obtain a foothold in one of the biggest projects in the south of England.

“The area is zoned for tall buildings and 400 homes as well as niche retail and top grade office space.

“Shoreham Port is hugely ambitious and we’re ambitious too with the most sustainable homes in Brighton – a place with a reputation for its green lifestyle.

“It’s a fantastic location and a great investment opportunity which we’re proud to be taking forward.

“This landmark project will form the western gateway to an innovative set of buildings marking the entrance to Brighton and complementing planned large-scale development at the eastern entrance by Brighton Marina.”

The homes are not just zero carbon. They are expected to generate a surplus for ten months of the year – a bonus not just in terms of energy bills but also ultimately in the properties’ value.

The design has already won plaudits from the likes of the government’s design watchdog CABE which praised the scheme’s sustainable credentials. CABE commented:

“The project is one of the best proposals for sustainable living that we have seen at design review and we wish this exemplary project well. “We look forward to ‘Code for sustainable homes – level 6’ projects becoming common practice.” 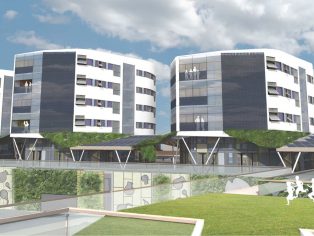