SCCD Development’s proposal for a £40 million mixed-use scheme at 387-399 Rotherhithe New Road in London SE1 has been granted planning permission by Mayor of London Boris Johnson.

The project, designed by HLM, comprises a new home for the Southwark Free School, a Sixth Form Centre for the City of London Academy that will be shared with local community-focused charity Bede House, 158 residential apartments and a covered multi-use games area for the local community.

“We have worked closely with the community throughout the process to ensure the scheme provides what they want to see in the local area. We are glad the scheme has now been granted approval and can get underway.”

“Working within a constrained site, we developed a high quality architectural solution that brings together four key components working together to create a cohesive development that positively impacts the area, raises aspiration and stimulates regeneration.

“This innovative development will enable more than 800 school places in the area, and by obtaining this consent, it will allow the two schools to begin planning the additional places for their community.”

The scheme has already been recognised for its design, receiving one of two Commendations in the Masterplanning and Mixed-use category of the prestigious New London Awards 2013, which recognises projects of the highest architectural and design quality as well as their contribution towards the local area. It has also been shortlisted in the Mixed-use Development category at the Placemaking Awards, which recognise projects, plans, people and organisations that are making places better. The winner is announced on 28 January 2014.

Full details of the proposals can be seen on the dedicated website, www.399rnr.co.uk. 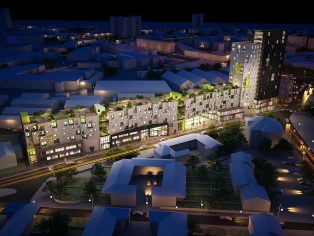