Community regeneration and housing specialist Keepmoat is celebrating after four of its West Midlands developments won prizes at a top awards ceremony. The awards showcase professionalism, excellence and innovation in the area’s construction industry and reward projects that bring a real value to the local community.

Two of the projects commended include an extra care village for older people, including a gym, restaurant, cinema and IT suite and a project to provide community apartment living for the homeless, with integral educational facilities.

“Creating better places for people in our communities is the ethos of Keepmoat, so being able to deliver valuable projects like these that help those people who really need it is the real reason we do what we do.

“However, to also win awards that recognise our capabilities across a diverse range of construction projects including both refurbishment and new build is a real bonus. They really demonstrate what Keepmoat is best at.

“I’m delighted that the hard work, expertise and commitment of our Keepmoat people has been acknowledged in this way. Standards in the industry are always on the increase so to be recognised for quality is an endorsement worth having.”

Among the projects recognised at the Built in Quality awards was Keepmoat’s Pannel Croft Extra Care Village, in Newtown, Birmingham – a £22 million development featuring 180 new one and two-bedroom apartments as well as onsite facilities such as a cinema and gym.

Built in partnership with Birmingham City Council and the ExtraCare Charitable Trust, Pannel Croft is the second of five flagship Extra Care schemes currently being built in the city, providing 21st century housing for the city’s older residents.

Another project commended at the awards was the innovative Snow Hill homelessness project in Birmingham City Centre which, as well as providing independent living for residents through 92 individual apartments, also features facilities such as offices, interview rooms, a music stage and practice area, a bakery and laundry.

The £6.25 million refurbishment project, which was delivered in partnership with Midland Heart, has now become the heart of the local community and a hub for local people.

One of the biggest successes of the project is the award winning new bakery area, which is occupied by a social enterprise called Frost and Snow – a bakery business specialising in handmade cupcakes set up to specifically to create new training and employment opportunities for formerly homeless customers.

It was not just Keepmoat’s regeneration work which was commended at the awards – two of the company’s new build developments were also recognised for helping to transform communities in Coventry and Wolverhampton, while providing high-quality and much needed family homes at the same time, with Keepmoat Site Managers Andy Staien and Gary Dickenson recognised for their roles in delivering the schemes.

Under the plans, 2,500 existing homes are being demolished and replaced with 3,300 new homes over 15 years. The first phase of 154 homes in the Deedmore area has recently been completed by Andy’s team.

By incorporating green technologies into the design of the new homes the carbon footprint and environmental impact of the properties has been reduced, meaning residents’ electricity and heating bills are much lower.

The Built in Quality awards formed part of the Celebrating Construction 2013 event, which is jointly hosted by Birmingham building control company Acivico, the West Midlands branch of the Chartered Institute of Building and the West Midlands Centre for Constructing Excellence.

Keepmoat’s Pannel Croft development won the Community category, Snow Hill scooped the Regeneration and Refurbishment award while Showell Park and Spirit Quarters in Coventry both won in the Housing category. 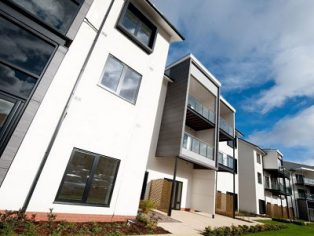