Keeping the public safe, not scared

Securing public spaces ­– rather than simply focusing on their aesthetics – has fast risen up the agenda for architects, but there is a risk of choosing overly utilitarian options, says Jaz Vilkhu of Marshalls Landscape Protection

The need to protect the public from vehicle-borne attacks and accidents has always been an important element for architects to consider on projects ranging from town and city centre schemes through to sports stadiums. In recent years, however, as criminal ram raids have increased in frequency and terrorist attacks claimed more lives, the task has become increasingly important. The issue of protecting public spaces poses two challenges.

The first comes from the fact that vehicle terror attacks require little to no planning and can be carried out in an instant. The natural conclusion from this is that it is extremely difficult to predict where and when an incident might happen, creating problems with specifying products to mitigate against this unpredictable threat.

The second is that all too often the products that are chosen are flawed, both aesthetically and for the protection they offer. Take metal barriers and concrete blocks, for example, which have long been the de facto choice. First, their appearance serves to create a hostile look and feel to an area, which leads to fortification. Second, while they are heavy and offer a physical barrier, quite often they’re not installed or specified with any security standards. In essence, what is being installed is effectively a dead weight that may stop a vehicle but doesn’t offer any actual security guarantees.

But that doesn’t need to be the case, and a range of options exist for architects to consider early on in any project that both protect and fit in with its wider aesthetics. These can come in the form of planters, cycle stands, litter bins and benches that can deliver to differing security specifications. Specifying to Publicly Available Specification (PAS) 68, for example, can see a product able to stop a 7.2 tonne lorry travelling at 40 mph when installed correctly.

For areas where the risk of a hostile vehicle attack is lower, or where protection might predominantly be needed against criminal ram raids – which have more than doubled in the last five years – or accidental collisions, other options exist. PAS 170, on the other hand, delivers a testing standard for vehicles of up to 2.5 tonnes travelling up to either 10 mph or 20 mph and is a more cost-effective solution in lower risk areas. In addition, options are also available in busy towns and city centres where, owing to the ubiquity of underground services ranging from data and electrical cabling to water, gas and waste pipes, installation can be a challenge. We are leading the way in innovating within this category, with the launch of a super-shallow foundation system, which has a depth requirement of just 100 mm, much lower than the traditional requirements of between 600 mm and 1,000 mm. For those installing the products, this range avoids the requirement for major excavation works, which can lead to road closures, and also minimises the levels of waste.

These options all serve to keep the public safe and not scared. A main objective of terrorists is to destroy the very fabric of our everyday life. While it’s vital to secure urban areas from attacks and crime, so too is the need to combat the psychology some of the more utilitarian products can create. By fortifying an area, we run the risk of reducing footfall, impacting businesses and having a detrimental effect on a location’s cultural heritage. Specifying aesthetically pleasing landscape furniture products that make sure the risk isn’t visible to someone using a space now needs to be high on the list of priorities for architects. By being aware of the threats posed and the options available, public spaces can be made both safe, and welcoming. 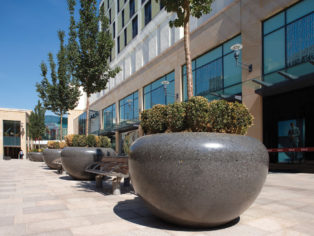