Architectural glazing by Kawneer was specified for a major hotel chain’s first village resort in Scotland and for a departure in design detailing for the business park it is located on.

The aluminium systems were specified by frequent Kawneer users Halliday Fraser Munro architects for their “familiarity with the use of the systems through past projects”.

The four-star resort on a high-profile three-acre former greenfield site in the park comprises a 148-bedroom hotel with restaurant, bar and conference and leisure facilities including a 25m swimming pool, luxury health spa, gymnasium and fitness suites as well as a Starbucks coffee outlet.

The building was designed by Halliday Fraser Munro with four and three-storey bedroom blocks above the restaurant and public areas at ground floor and the leisure facilities contained within a two-storey block to the rear, with conference facilities also on the ground floor.

The restaurant and public areas are orientated to open out onto The Fourcourt – a high-class amenities hub which acts as the central point for park events, providing a sense of community, interaction and a buzzing social venue.

Built over 12 months by main contractor Sir Robert McAlpine for the park’s developers Drum Property Group, the complex is of steel frame structure with bathroom pods and granite and aluminium rainscreen cladding in keeping with Aberdeen’s heritage but also reflecting the modernity required in a business park of this nature.

Part of the park’s Phase 2 development, and employing more than 100 people, it is expected to play a major role in generating economic activity for the north-east of Scotland for many years to come.

“The building had to fit into the design guidelines that had been approved for the overall business park. But given the unique nature of the building use, and the prominent location at the highest point on the site, a landmark building could be considered.

“As it fitted into the design guidance the planners were very receptive. The change in colour of the materials from other buildings on the site was accepted as this site was identified for a landmark building.”

“The curtain walling was designed to create large, clean panes of glass with the black granite rainscreen cladding frame accentuating the difference in planes. The curtain walling and granite surrounds are fundamental to the overall aesthetics of the building, creating a framed set of elevations.”

He also said that aluminium’s sustainability was always a consideration but had not been the primary reason for specifying it:

“The ground floor areas with large expanses of glass overlooking The Fourcourt become visible at night and help to create a lively heart to the Prime Four development. The client is delighted with the overall aesthetics of the building.”

“The mixed use of the building – bedrooms, coffee shop and gymnasium – demonstrates the suitability and versatility of Kawneer glazing systems in each environment while maintaining the continuity of appearance.” 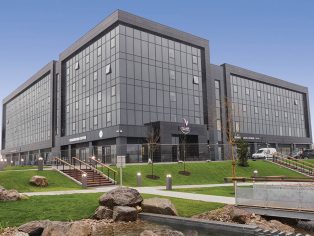