Leading architectural aluminium systems supplier Kawneer has been awarded one of its largest contracts to date – a state of the art new complex at the heart of De Montfort University’s (DMU) Leicester campus.

The new Fletcher Complex will be an impressive base for the internationally-renowned schools of Fashion and Textiles, Art, Design and Architecture, with sector-leading teaching facilities that will help DMU to be one of the foremost providers of creative higher education in the UK.

The extensive plans by CPMG Architects will add extra break-out areas for students, utilise the university’s proximity to the River Soar, and significantly improve the existing centrepiece Fletcher Tower, a city landmark dating back to the 1960s when it was described as “truly revolutionary”.

Kawneer’s AA®100 zone-drained curtain walling will be complemented by AA®720 top-hung casement windows, a large amount being Teleflex operated,  and series 190 heavy-duty commercial entrance doors throughout the tower refurbishment and extensive new-build elements which will replace the Fletcher low-rise buildings.

The latter include a “sunwah”, a facetted on plan, outward-sloping “pod” which protrudes from the main building. Incorporated within the curtain walling on this are automated parallel opening windows and bottom-hung open-in ventilators.

The Kawneer elements will be installed by approved specialist sub-contractor APiC UK for main contractor Balfour Beatty, with full completion due in the summer of 2016.

The proposals form a critical phase in DMU’s long-term plan, built around an ambitious £136million vision to re-connect the city centre to the waterfront by creating a series of linked public open spaces through the De Montfort campus.

The design focuses on visual vibrancy and creating a refreshing and dynamic environment. Features will include atrium spaces with open galleries to maximise views between floors and departmental areas, along with sculpture podiums and catwalks as an external forum for exhibition. 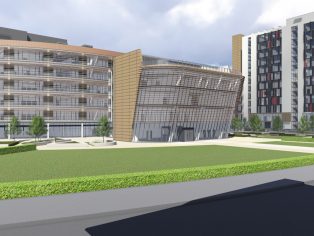