Kawneer systems help save Liverpool schools … and how!

Elements of the whole range of Kawneer’s architectural aluminium systems were used on the first school to benefit from Liverpool City Council’s BSF (Building Schools for the Future) bailout.

The college benefited from Mayor Cllr Joe Anderson’s £169million Investment Plan for Schools, devised as a rescue package after several of Liverpool’s BSF projects were scrapped in 2010. Funding was a combination of city council and Government money and was negotiated as part of Liverpool’s City Deal.

The council wanted value and quality – and for 60per cent of the budget to be spent with Liverpool companies – and opted for a Willmott Dixon solution procured via SCAPE to reduce the costs and time of procurement. The benefits of SCAPE’s quick procurement process were evident from the start, allowing Notre Dame to start six months earlier for its 1,000 students and 70 staff.

“Notre Dame Catholic College was a huge building covering 10,700m2 and we completed it in 56 weeks for £15million. This was tremendous value.”

Delivering Notre Dame at such value was not just about the procurement route. Principal surveyor Lee Johnson explained: “Our proactive approach saw us de-risk it and reduce the contingency budget set aside. We further sliced costs through looking at the structure of the building. Working with our supply chain, we found we could substitute expensive timber beams for glulam to create the design’s high roof.”

These were just some of the reasons why Notre Dame came in under budget, with the extra helping to fund a new car park. Mike explained:

“We were delighted to see it open, a result of all parties pulling together to show the city of Liverpool just what we can do. They got a fantastic new college.”

The need for value does not mean Notre Dame, designed by Sheppard Robson architects, has no wow factor. Apart from the Kawneer glazing, the façade was finished in a special material that changes from green to gold depending on the light, giving an eye-catching appeal. The layout is equally special, with a series of pod-like classrooms which are rearranged within the space.

The large expanse of the building also makes it flexibleenough to be used for other purposes in the future should the need change. This may well be necessary, because Notre Dame is in ‘Project Jennifer,’ a £150million overhaul of the Great Homer Street area by Liverpool council and the developer St Modwen. 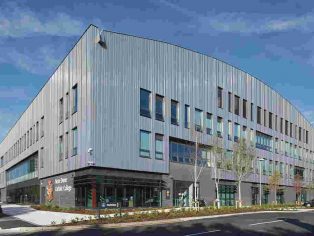