John Robertson Architects (JRA) has revitalised an existing office building in the City of London with a prominent new entrance hall and retail podium. Briefed by client Ocubis with creating “Clerkenwell meets the City”, Cannon Green provides a contemporary workplace environment complete with hot-desking and co-working spaces, as well as bike storage, showers and a cycle workshop.

The site comprised two orthogonal office towers – constructed in 1966 and refurbished in 1981 – separated at ground level. A double-height entrance podium now unifies the two buildings, with the introduction of an interconnected office reception and retail space at ground floor.

Positioned at an angle to the existing building to maximise the use of available space on site, the scale of the new podium has been carefully designed to respond to the surrounding streets, ensuring a sensitive and comparable scale to nearby Cannon Place while creating a striking new entrance.

A striking element of the podium design is the new feature stair, which JRA has envisioned as a sculptural object within the entrance hall that sweeps up alongside the curved glass enclosure toward the office lounge at first floor level. The practice chose to use concrete for the stairway, providing mass and depth to complement the exposed steelwork of the podium and existing building, while also providing a sound barrier to the restaurant space below. Concrete was cast in situ with a fine finish, including a complex variety of curves, landing shapes, and riser depths and widths. At the top of the stairway, an amphitheatre arrangement provides informal meeting spaces, featuring integrated seating.

“Cannon Green is the story of the dynamic revitalisation of a tired 1960s ‘rent-slab’ office building. It shows what you can do to re-love a building; spending wisely, being inventive and taking risks.” 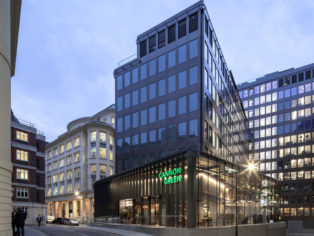 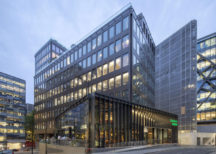