A ‘demountable 6x6m house’ fabricated in 1944 by one of the world’s most famous designers, Jean Prouvé, has been transformed into a sustainable, portable holiday home as part of a unique project by architect Rogers Stirk Harbour + Partners and building services and environmental consultants ChapmanBDSP.

The portable house was originally created by the French designer to provide emergency shelter to refugees in war-torn France. It is made entirely from wood and metal, making it easy to transport and able to be assembled in as little as a day.

The adaptation was commissioned by Galerie Patrick Seguin. It is designed to bring a new lease of life to this historic piece of housing architecture, while pushing the boundaries of sustainable design by creating a portable home that could function independent of infrastructure in practically any climate.

“The brief was rather simple: turn this house into an autonomous retreat that can function anywhere in the world, from summers in the south of France, to winters in Colorado.

“However transforming a disaster relief house that is just about enclosure into a space with demountable plumbing and electrics is not so simple. You’ve got to be aware of what you are proposing for every five millimetres of space.”

As part of the adaptation, RSH+P and ChapmanBDSP designed two new pods which dock with the original 6m x 6m structure and act as separate bathroom and kitchen units. A number of simple and robust sustainable technologies have also been added by ChapmanBDSP, from modular solar panels for use in different climates through to a mobile boiler system normally used in boats and caravans.

Shashank Jain, senior environmental consultant at ChapmanBDSP, said the sustainability lessons learned on the project could be applied to large-scale developments as well. He explains:

“Once occupied, the house will have finite resources, so we needed to consider energy and water usage for every single product and piece of technology installed. Any technology that required surplus energy to run had to be discounted. It was a valuable exercise in achieving the greatest efficiency from the least energy input.

“Often that meant thinking outside the box – looking at other industries to find new techniques and technologies that could be applied on this project. When it came to insulation, for example, there was nothing suitable in conventional residential construction that would work with the timber and metal frame of the Prouvé house. The solution came in the form of a special vacuum insulation used in the aerospace industry. This could be applied between the timber panels; maintaining the original appearance of the house while actually delivering a thermal enclosure two or three times more efficient than traditional insulation.”

“Over-engineering new buildings has become increasingly common as developers strive to achieve higher energy efficiency ratings; often by throwing endless technology at the problem. This project was a timely reminder of what can be achieved with intelligent design and the smart deployment of appropriate technology.”

Galerie Patrick Seguin now plans to showcase the project over the next twelve months. It has already been requested by galleries, educational institutions and art fairs across the world. 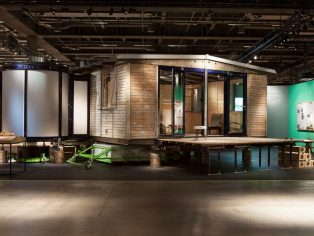 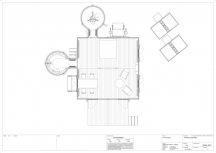 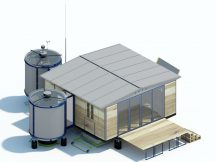 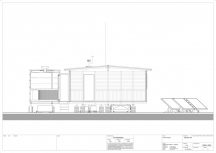