JDS Architects is pleased to announce the nomination of its project Kalvebod Waves for the Big Arne Award. The award is given to completed works and initiatives that have raised the architecture of the metropolitan Copenhagen area in the past year. Kalvebod Waves is nominated for the award because it contributes to reuniting the city of Copenhagen with its harbor. To create this urban spot on the waterfront, JDS Architects teamed up with KLAR, Future Experience, U-turn and White Water Adventure Park.

From Islands Brygge to Kalvebod Waves
At the turn of the millennium, the center of Copenhagen was given an incredible breath of fresh air or rather fresh grass by the opening of Islands Brygge Park. The project injected some 28.000 m2 of outdoor space for all. In 2003, we, as PLOT (now JDS and BIG) designed the harbour bath project, which introduced a new concept of bathing and water sports to the capital. The success was immediate and the first real signs of the city turning itself back to its waterways became evident.

Kalvebod Brygge is situated opposite this popular Copenhagen summer hang out. Kalvebod Brygge has the potential to be Islands Brygge’s more urban addition but has, until now, been synonymous with a desolated office address devoid of life and public activities. The new urban waterfront is the perfect hub for summer festivals and water related activities.

When addressing this infamously gloomy and desolated side of the harbour, we put our focus on two major design aspects: to create urban continuity and to locate new public spaces on the sunny parts of the water. What has doomed the Kalvebod area until now were the long shadows drawn by the imposing structures fronting it. We studied the course of those shadows throughout the day and the year and located two main pockets of shadow-free zones. We decided to program those areas as both resting islands on the water and actual programmed spaces, containing until now the facilities of a kayak club. From there on, all we needed was to find an active way to reconnect those islands to the urban network and to make them relate to the city’s infrastructure. 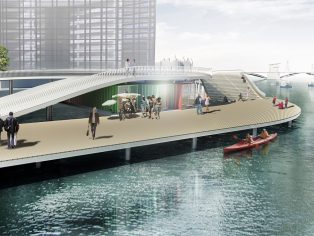 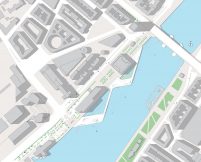 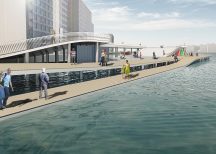 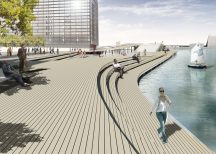