BDG architecture + design has completed the London Headquarter for Greensill, creating a stunning bespoke workplace that reflects and captures the journey of Greensill since its inception in 2011, to become the leading non-bank provider of working capital finance for companies globally.

Originally based on level six of 1 Southampton Street, Greensill’s rapid growth required the acquisition of floors one and two to accommodate its expanding workforce. It was important that the interior design of all three floors responded and complemented the architecture of the impressive Grade B listed building, which is located in London’s West End, within the boundaries of several local, national and world conservation heritage sites.

The project began in October 2018 and was completed in August 2019, taking place whilst the client stayed in-situ, necessitating the need to create swing space to assist with logistics and minimise disruption to the company’s operations.

BDG introduced a complementary colour palette throughout the space, which built upon Greensill’s existing brand, emphasising a neutral environment that has created a space conducive to building client and partnership relationships.

The strategic design gives careful consideration to the arrangement of people, functions and communication between the three floors, thus ensuring that the space will continue to support the open plan culture of Greensill through its inevitable expansion.

Employee wellbeing was recognised in all elements of the design, through the creation of collaborative workspaces with wall-lined writeable glass, sit-stand desking, break out areas, tea points, and acoustic panel lined individual privacy pods, to ensure choice and variety of environments for employees to work at. Placed throughout the space, for not only aesthetics, was biophilia in the form of shrubbery planted on storage units.

The plants, which are low maintenance and insect resistant due to being planted in porous pellets, promote air purification in the space as well as adding a welcoming atmosphere. Technology plays an important role in the design, especially on the sixth floor, and is standardised through all the meeting rooms with simple, consistent and effective AV. Tech booking systems with intelligent controls are located outside of the meeting spaces to ensure that rooms can be secured in a clear and efficient way. Smart technology introduced to the meeting rooms also allows the lighting and window blinds to be controlled at the touch of a button.

Debs McKenzie, Executive Assistant at Greensill said: “BDG’s ability to translate our ideas and concepts into an innovative, ambitious and flexible working space has
been exceptional.” 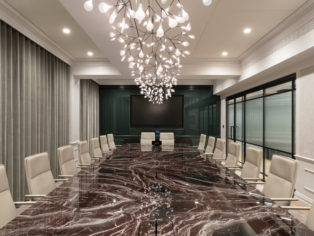