The T Fondaco dei Tedeschi, located beside the iconic Rialto Bridge on Venice’s Grand Canal, has been referred to as the building equivalent of a historical ‘palimpsest,’ or manuscript. This is because it incorporates an array of preservation and reconstruction techniques spanning­ several centuries.

The 9,000 m² building started life as a 13th Century palazzo used as a trading post for German merchants, and was twice destroyed by fires, then rebuilt in its current form in 1506.

The building was converted into a customs house in the 17th century, and significant structural changes were carried out in the 1930s, under Mussolini, to transform it into a post office. In 1987 it was listed as a Monument, restricting permissible alterations.

Fast forward to today and the Fondaco has taken on a distinctly 21st Century guise as a high end department store, occupied by tenants DFS of Hong Kong, its many historic layers exposed to view alongside new architectural interventions and plush interiors.

The large-scale architectural additions and preservation works were carried out by Netherlands-based architects OMA, headed up by founder Rem Koolhaas and partner Ippolito Pestellini Laparelli. The internal retail vision was developed by UK-based Jamie Fobert Architects.

A key aim for the latest reworking of the Fondaco was to demystify the ‘sacred’ image of a historical building, explains Laparelli: “Historical buildings in Italy are, in the majority of cases, considered immutable monuments to be preserved free of transformation or adaptation. Our project refutes the idea of declaring one phase of the Fondaco’s history more authentic than another. It makes visible the idea of the historical palimpsest, in many places exposing the accumulation of layered and historic materials, to encourage people to acknowledge it is both historic monument and modern building.”

OMA’s fascination with old buildings and the challenges associated with their restoration was first explored in the exhibition ‘Cronocaos’, for the 12th International Architecture Biennale in 2010.

The design for the Fondaco, unveiled the same year, is the latest in a trio of widely praised renovation and restoration projects carried out by the studio. The Fondazione Prada project in Milan opened in 2015, saw the preservation of a 19th century industrial building, and The Garage Museum for Contemporary Art, in Moscow, opened the same year, comprised the renovation of the 1960s Vremena Goda restaurant, a prefabricated concrete pavilion that had been derelict for more than two decades.

The restoration of the new Fondaco went through an extensive two-year period of structural investigations that revealed a patchwork of historic alterations. The original towers had been removed, and the courtyard was covered with glass in the 19th Century, then in the 1930s the building was almost entirely reconstructed with modern concrete technology.

Regardless of the history of adaptations and the structure’s lack of authenticity, it was granted the legal status of ‘monument’ in 1987. This restricted OMA to a finite number of structural changes including new vertical circulation routes, new entrances from the Campo San Bartolomeo and the Rialto, a new steel and glass pavilion, suspended above a central courtyard, and finally a wooden terrace on the roof providing views over the city.

Most new additions were needed to ‘refunctionalise’ the building to meet contemporary needs, such as the addition of a central lift and stair core, and a large feature escalator with wood panelled sides and crimson red steps, which appears to hang in mid air but is actually supported on a steel truss.

“The escalator and lifts are like excavations through the building, through which the existing structure is left naked, rough and brutal,” says Laparelli. “As people move through the building they go from areas that are polished and into areas where stratification of layers is exposed.”

The escalator is visible through a new hole punched through the rear wall of the gallery, intended to create a sense of permeability.

Every proposed alteration was debated at length with the City, fortunately the existing fabric was considered robust enough due to the consolidation process that took place during the 1930s. Some compromises had to be reached along the way. OMA had proposed radical interventions during early stages of design, when knowledge of the existing structure was scarce, such as an escalator running through the courtyard that could be lifted like a bridge to free up the courtyard space for events.

“Step by step we were able to gain back some ground by demonstrating that certain areas of the building were not very authentic but stable enough to support structural changes,” says  Laparelli.

A plan to reinstate a historic dark red paint scheme on the facade was abandoned when Venice’s strict chromatic strategy prevented the use of bright colours. Instead, the red was used on internal plaster walls facing the galleries.

The building’s most striking contemporary addition is a Miesian steel and glass ceiling, replacing a 19th Century glass ceiling, that hovers over the central courtyard, and doubles up as the floor of a new exhibition space above.

The ceiling is laid out in a grid of 20 metre-long beams that span from one side of the courtyard to the other, mimicking gridded ceilings seen in many historic buildings. The beams narrow at the edges (in section), so that the structure appears to float separate from the edge of the historic cornice. LED lights are positioned between two layers of glass that form the floor of the pavilion, and the ceiling of the courtyard, and help compensate for a lack of natural light in the courtyard on dark days when less light is able to penetrate the glass.

“Visually we wanted to create something that looks like a pure insert, but it that had to adapt to the irregularities of a historic building, which required sophisticated computer modelling of the structure,” says Laparelli.

Traditional materials were given a contemporary treatment in some areas. The courtyard floor incorporates blocks of Red Verona Marble and highly durable Istrian Stone, typical to many courtyards and covered passageways in Venice. However, they were laid out in a contemporary geometry of diagonal stripes, rather than the traditional chequerboard design.

The use of brass is common to Italian architecture, notably through the work of 20th Century architect Carlo Scarpa who completed several projects in Venice. At the Fondaco, the brass was oxidised to create surface tones of blue, orange or more traditional gold.

“Brass is a common denominator in many parts of the project, in general we tried to tread the fine line of using well established materials in innovative new ways,” says Laparelli.

City authorities required the existing sequence of rooms, along the gallery surrounding the courtyard, to be retained. The preservation laws were so unflinching that a wall built in 1930s at the same location as a wall from the 16th Century had to be treated as a historic wall.

As a result, shops for different brands are all separated by internal walls, and accessed via a single entrance onto the gallery. There are no windows onto the gallery, forcing brands to come up with creative ways to organise their programme and visibility. This layout is highly unusual for a department store normally associated with open plan spaces and easily visible signage and merchandise.

Conversely, the requirement to preserve the existing windows in the facade helped open up the building to the city, giving shoppers views of surrounding architecture and the sparkling waters of the Grand Canal.

Further spatial constraints came into play when trying to incorporate a plethora of complex M&E systems associated with a department store. Service runs in the ground and third floor commercial spaces are concealed in ceiling or floor voids, but this was not possible on intermediate floors, where instead ducts and cables are exposed as a separate architectural component.

OMA was always keen to create an attractive destination for locals, not just a ‘profit generating machine’ for tourism. Venice has suffered from a shrinking local population in recent years as a result of tourism and escalating property prices, population levels in the historic island centre have reduced from around 250,000 in the 1960s to just 58,000 today.

“When the client originally approached us, they wanted to transform the Fondaco into a luxury hotel,” says Laparelli. “We thought that was a bit of a sad prospect because hotels are purely for tourists and it would have made the building inaccessible for many people. In contrast, the Fondaco has publically accessible spaces, like the pavilion and courtyard used for concerts and exhibitions, and commercial components related to food and crafts.”

In this respect, OMA took its inspiration from existing consolidated department stores, like Selfridges, in London, and Le Bon Marché, in Paris. But perhaps the building’s current function is not so important, given its long and chequered history, perhaps all that matters is it remains a bold and recognisable presence on the banks of the Grand Canal. 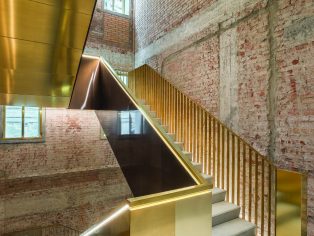 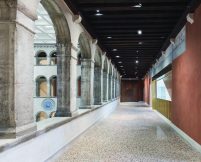