ISG has been appointed by Neptune Developments to transform the Lime Street area of Liverpool with a £39 million mixed-use scheme that includes retail and leisure provision, student accommodation and a new Premier Inn hotel.

Neptune, Liverpool City Council and Sigma Capital form the partnership behind the scheme and Neptune is delivering the project on behalf of funder and site owner Curlew Student Trust.

The steel frame structure will be clad with composite insulated panels and finished with perforated aluminium panels, similar to those used at Liverpool’s RIBA Stirling Prize winning Everyman theatre. Designs have yet to be finalised for the panels, but the visual concept is for images of Liverpool’s historic city scape displayed on the building’s facade.

ISG is responsible for the construction and fit out of the student accommodation and Premier Inn hotel, with the latter a continuation of a long-standing relationship with the hotel chain, including a number of recent schemes in Scotland. The project also includes minor road alterations and public realm upgrades.

“The Lime Street area of Liverpool has been in desperate need of a catalyst scheme to revitalise this key thoroughfare near the centre of the city. This mixed-use scheme represents the first phase of the Knowledge Quarter master plan and is a hugely important regional project that will transform and enhance the character and aspiration of this key gateway into the city.” 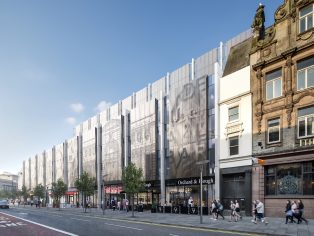