ISG secures a brace of wins for its Agilis Template School

ISG and architect Stride Treglown’s Agilis schools template has been selected by Vale of Glamorgan County Council to deliver a further two new primary schools with a combined value of £5.5 million. ISG’s first Agilis project for the council was successfully handed over last year, with Ysgol Gymraeg Nant Talwg in Barry becoming the first template school to be delivered in Wales.

Following the success of the pioneering Ysgol Gymraeg Nant Talwg project, the Agilis template will be used for the new £2.2 million Ysgol Gymraeg Dewi Sant primary school in Llantwit Major. A £3.3 million Agilis scheme in Barry sees ISG deliver Oak Field Primary – a new English language school on the campus of the existing Welsh language school, Ysgol Gymraeg Gwuan Y Nant – which will also be refurbished as part of the project.

Ysgol Gymraeg Dewi Sant will be constructed on the site of an existing school, which will remain operational throughout the programme. The 210 pupil, single-storey steel frame school will be constructed on a sloping site with a central learning zone leading to eight classrooms and a flexible sports/dining hall space. Through the use of advanced building materials and intelligent design, the new school will achieve an excellent EPC A environmental performance rating. Ysgol Gymraeg Dewi Sant will also boast roof-mounted photo voltaic cells to generate emission free electricity.

The scheme includes hard and soft landscaping to create play areas, including canopies in the early years playground for wet weather play. ISG will also create a new access road onto site, providing an alternative entrance to the campus for the new building and enabling construction work to remain separate from the existing school. The project is set for completion ahead of the start of the new academic year in September.

The flexible Agilis template will be modified at Oak Field Primary School, creating a two-storey building that addresses the restrictions of a confined site. The existing school on the Barry campus provides both English and Welsh language teaching and the scheme will create a standalone English language school for 210 pupils, with the project including a substantial refurbishment of Ysgol Gymraeg Gwuan Y Nant.

The new steel frame building will sit on piled foundations and feature a double height hall and central learning zone, with classrooms positioned around these spaces at both ground and first floor level. The building will achieve an EPC A environmental performance rating and also incorporates photo-voltaic panels on its roof, with completion scheduled for summer 2015.

“It is a truly exciting time for education in the Vale of Glamorgan. The new Llantwit major learning community and the redevelopment of Oak Field Primary School, provide opportunities to deliver 21st Century facilities across the primary and Welsh language sectors of education. Our work with our design and construction partners is enabling younger learners in the Vale to benefit from two more state-of-the-art primary schools.”

“Both projects demonstrate the inherent flexibility of the Agilis schools template, with modifications being introduced to both of these schemes to address specific site conditions. Agilis provides a fast and high-quality roll out solution for the Vale of Glamorgan County Council, which has embraced this new construction process and methodology to great effect.” 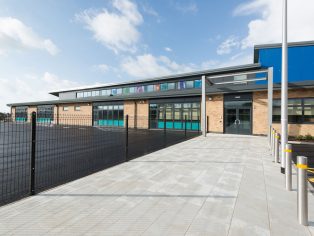