Irish design is represented for the first time at the V&A during LDF in an ambitious Landmark Project The Ogham Wall. Created by Grafton Architects, winners of numerous international awards including the 2008 World Building of the Year Award, working in conjunction with Graphic Relief, the installation was inspired by the Irish Ogham alphabet, dating from approximately the 4th century AD. The imposing forms of The Ogham Wall will fill the V&A’s Tapestry Gallery as one of a series of international events for Irish Design 2015 irishdesign2015.ie, a year long initiative backed by the Irish government promoting and celebrating Irish design in Ireland and internationally.

The installation is monumental in scale, consisting of 23 concrete fins stretching to a height of three meters, standing in the atmospheric surroundings of the V&A’s Tapestry Gallery. Each cluster of fins relates to a letter in the Ogham alphabet and each letter symbolises a native Irish tree. The elemental intensity of the stone-like fins, calls to mind ancient Irish and British sites with circles and standing stones such as Drombeg, Garrane or Lettergorman in County Cork, or Stonehenge in England.The impact creates a multi-layered immersive experience that invites visitors to engage with the tactile surfaces, which vary in texture, temperature and colour.

“The fusion of contemporary design thinking with innovative process in the realisation of this landmark project communicates the essence of Irish Design 2015. The Ogham Wall reflects Ireland’s ability to weave story telling and language with ancient heritage in the creation of a compelling piece of work that has innovation and collaboration at the heart of its developmental process. We are delighted to have supported world renowned Grafton Architects who collaborated with Graphic Relief on this significant and considered installation and to be presenting it in partnership with LDF at the prestigious V&A museum”

The Tapestry Gallery is the ideal setting for The Ogham Wall. In contrast to the still and quiet atmosphere created by the backdrop of the fine tapestries, the Wall forms a dramatic and imposing installation that is robust and rough, configured as a path for visitors to move between, with the placement of the fins encouraging views of the tapestries from various angles. The 15th Century Devonshire Hunting Tapestries present their pictorial surface to the public, but behind these wonderful surfaces of threaded pictures are hidden a complex weave of threads that make the pattern. This combination of ‘front’ and ‘back’ surfaces is similar to the making of the concrete fins.

Visitors can touch and feel the various surfaces of the concrete, exploring the variations and textures contained in each fin. Each of the 23 fins is unique and cast using a combination of an old-school artisan approach combined with digital moulding technology developed by Graphic Relief.

The fins are constructed from a variety of concrete mixes containing various metals that reflect the patterns inspired by various tree bark textures. The project has been sponsored by Techrete Ireland Ltd.

“Presenting an installation at the internationally renowned V&A is an incredible opportunity and honour for our company. In developing plans for The Ogham Wall, we wanted to design something that would be visually striking but would also encourage engagement and interaction. Concrete is often considered a ‘poor’ material in the built environment. However, Graphic Relief has developed a very sophisticated mould and mixture of metallics to bring the ancient and modern together, creating beautiful and rich columns that we have placed in an almost rhythmic manner. This exploratory collaboration has allowed us to look at the use of concrete and digital processes as we have not done previously and may inform our future projects”

This Landmark Project at the V&A is one of a number of Irish design events at LDF this year as part of ID2015. For the fourth year, the Design & Crafts Council of Ireland will present at Tent London. This year’s exhibition entitled Ó, meaning ‘from’ in the Irish language, will feature beautifully designed products in stone, glass, ceramics, wood and textiles from over 20 designers who are passionate about materials, production and a strong sense of place, including Snug, Ceadogán, Aodh Furniture, Andrew Ludick, Superfolk and Mourne Textiles.

ID2015 will also launch The Souvenir Project, a collection of contemporary souvenirs that explores the local context, championing creative collaborations between Irish designers and makers. The project specially commissioned by ID2015 and curated by Jonathan Legge, Makers & Brothers, will be presented at Rochelle School, Arnold Circus during LDF. A selection of work from The Souvenir Project will be dual sited and available to view at Tent London as part of Ó. 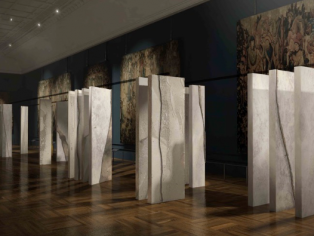