Leslie Jones Architecture has designed a 400,000 sq ft contemporary extension to intu Watford in Hertfordshire. The new £180m extension creates a single new 1.4m sq ft retail and leisure destination which will elevate the town into CACI’s top 20 national retail destinations ranking, placing it alongside Edinburgh and Bristol. The new retail and leisure offer is gathered around an impressive central space covered by a striking glazed canopy providing a new focal point.

The scheme makes use of the existing buildings and structures which have been repurposed and reclad to sit alongside the newly constructed extension.

Construction on the extension began in November 2015, with a further £13m investment made earlier this year to the existing centre, enhancing flooring, bulkheads, ceilings and lighting, as well as upgrading car park lobbies and WC facilities.

The extension includes an 113,000 sq ft Debenham’s flagship store, which opened on 27 September. The flagship store makes an imaginative use of the existing concrete market building and basement service area. Debenhams will be joined by a nine screen Cineworld, a Hollywood Bowl Ten Pin Bowling alley, and 13 fashion retailers including well-known names such as Superdry, New Look, H&M, and Jack Wills. The centre will expand the town’s existing dining offer with 11 new restaurants including TGI Friday, The Florist and Yo Sushi.

“Leslie Jones Architecture was appointed by intu to reimagine and integrate Charter Place with the existing intu Watford to create a new leading retail and leisure space. A central requirement of the project was to bring intu’s brand to life in the cohesive 1.4 million sq ft centre.

“Based on our long-standing relationship with the client, we were able to inject creativity into the design, while ensuring intu’s commercial requirements were met. The resulting design, with its gable-inspired façades, references the surrounding townhouses and the light glazed covering of the central space, has been designed to encourage easy movement between the two centres, whilst respecting the existing scale of the high street. Utilising existing buildings alongside new development, the centre will be a focal point for Watford’s community and visitors alike to meet, shop and socialise.”

Debenhams, New Look, H&M, Superdry, Jack Wills and Yo Sushi will be part of the first phase of launches in September, followed by the Cineworld multiplex and restaurants set to open beginning of December. The Hollywood Bowl operated bowling alley will launch in mid-December.

“Our £180 million investment at intu Watford is part of our commitment to deliver a compelling mix of retail and leisure and an unrivalled customer experience, across our portfolio of the UK’s most popular shopping centres. We are focused on creating and curating winning destinations for retailers that provide customers with the very best experience.” 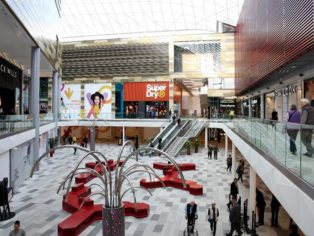