When SP Architecture Engineering was tasked with revamping the courtyard garden in the building offices of ING in Rozas, Madrid, they specified Formica Group’s VIVIX® for the facade.

The comprehensive renovation project included a central pond and surrounding 15m² patio with plant features. Inefficient ventilation had resulted in the condensation and eventual oxidisation of the steel structure and polycarbonate sheets covering the garden.

The effects of humidity had also left its mark, causing the premature aging of the painted brick facade which was in desperate need of maintenance. Additional factors such as excess moisture resulting from vegetation and the passage of time also contributed to the garden’s slump into a state of deterioration.

To tackle the problem, the truss structure was replaced, a moisture detector was added, and large plywood beams were used to cover the photovoltaic glass panels. As part of the renovation, the office facade surrounding the garden interior was replaced with 8mm thick VIVIX panels in Porcelana.

Formica Group’s VIVIX was specified for the facade due to its rainscreen properties, ability to limit excessive moisture and ease of maintenance. Selected façade panels featured a perforated pattern containing Clementine from the Formica® Collection; thereby accentuating the design through the incorporation of ING’s brand colours. 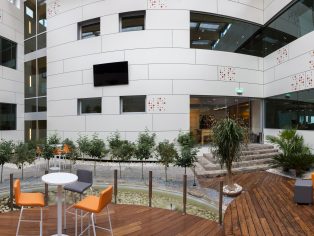