If Carlsberg made buildings…

When Carlsberg UK built an extension to the bottling plant at its brewery in Northampton it wanted the new building to stand out externally as a great building. A major contribution to this aim was made possible by the choice of Rockspan and Europanel stone wool core cladding panels manufactured by Eurobond Laminates.

Yorkshire-based Caddick Construction won the contract to design and build the bottling hall and used a combination of panels in five shades of green – light at ground level to dark at roof level.

The 7,000 m² expansion, within the Northampton Waterside Enterprise Zone, enables Carlsberg UK to double its production of brands including Carlsberg, Carlsberg Export, Carlsberg Special Brew, Tuborg, Skol, Holsten and San Miguel beers. The facility can produce a staggering 60,000 bottles of beer per minute – ten million per year. It also has a number of windows built into its side where people passing by can see bottles progressing through the factory. 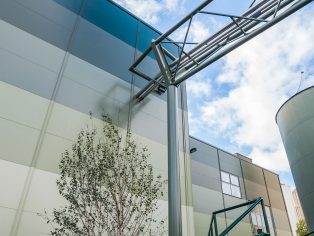