Exchange Place in Kidderminster, the new pedestrian-priority square designed by IBI Group, has been highly commended at the 2017 Urban Transport Design Awards.

The awards celebrate schemes that enhance the built urban environment whilst delivering transport improvements. Wyre Forest District Council and Worcestershire County Council were the client organisations for the project, which delivered a new town square outside the town hall in a space that was previously dominated by a complex carriageway configuration despite very low volumes of motor traffic. The space still accommodates the same flow of traffic, including buses, whilst acting as the social and civic heart of the town.

The design of the black granite square represents the form, colour, and detailing of the ‘Penny Black’ postage stamp. This celebrates Roland Hill, a local Victorian philanthropist, who founded the modern postal system and whose statue stands tall in the space. Subtle placement of street furniture was used to guide vehicles, in place of kerbs, which previously disrupted pedestrian walking routes and limited the scope of space to be used for the town’s busy annual events programme. Post-implementation behaviour studies led by transport consultants Phil Jones Associates, have concluded that the un-delineated space is working effectively, with average vehicle speeds around 10mph and pedestrians being able to make use of the entire width of the space, crossing freely.

Previous award winners in this category include Castle Square, Caernarfon in 2011 and Lyceum Square, Crewe in 2012 both by IBI Group. 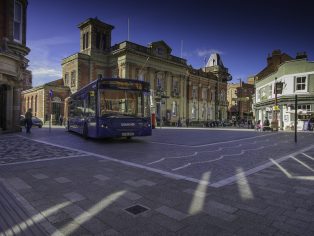