The Government has just announced that it is to sell off a number of inner city prisons for housing developments.

These prime sites could offer a unique opportunity for developers, beyond the usual new housing stock, to create green outdoor spaces which could promote community cohesion.

Why not look at creating new allotments or community gardens on these sites? Whilst London is the greenest major city in Europe according to the City of London Corporation, there’s still not enough green space that is fully integrated into communities. A place to play, relax and even meet the neighbours. In Camden alone, there are 883 residents waiting up to 40 years for a chance to till one of the 195 allotments. Surely, developers could help tackle this problem? Plus it gives property marketing experts a golden opportunity to highlight the scheme’s green credentials and attract buyers.

A city garden can be ecologically diverse and rich, and provide more pleasure to a community, than a much wider area of land that is more remote. It’s important to our environment, to our health and offers buyers added value and the attraction of building community ties.

Prisons in London which could provide very lucrative real estate include Pentonville and Brixton.

The Government intends to build nine modern super prisons and sell off a number of Victorian prisons which are not fit for purpose, saving £80 million in running costs and freeing up prime sites for development, although it may be some time before the prisons which will be sold off are named.
But it could provide space for 3,000 much needed homes.

The prison sites boast a lot of potential for community spaces. Indeed it is possible to get extremely creative in inner cities where space is often at a premium and demand for housing is high.

Look at what has been achieved in New York with the Highline. It forms a linear garden on an elevated rail road spur which runs for about one and a half miles. The project has ensured the historic structure remains intact and contributes to the vitality of the city, becoming one of NYC’s most popular tourist destinations.

What amount of green space will be available at these prison sites in the UK depends on how developers use the land and buildings. Will the prisons be pulled down completely or offer room for conversion? Perhaps community roof gardens could be possible? And could prison walls be converted into London’s very own highline garden to retain the historic Victorian structure? How about creating a community orchard in that space? Could introducing a place to grow your own be the unique selling point that helps these developments stand out?

At the Graylingwell Park development in Chichester, we connected the traditionally conservative house building sector with the idea that sustainable living did not have to be about hard work or guilt.

Graylingwell Park in Chichester is the UK’s largest carbon neutral development, offering community events and amenities, making it a great place to live and to visit.

Our big idea was ‘Limitless Living’ and we used this personality and visual identity in our communications. We emphasised the limitless potential of the development which is set in 85 acres of rolling parkland, offering limitless space and activities, from summer food festivals to Christmas ice skating.

The launch event in Chichester city centre made a dramatic impact and saw a 250 per cent increase in visitors to the marketing suite over the two-day launch period. Clearly it’s good to be green. 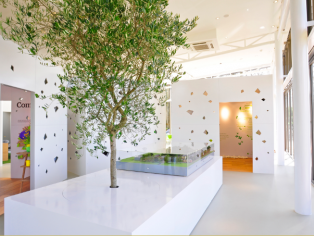