How air mobility can serve a greater good: a research collaboration by MVRDV and Airbus investigates how to integrate air mobility into urban environments

Thanks to advances in computing, materials, and electric propulsion technology, one of the most enduring symbols of futurism – flying vehicles – may soon become reality. But in spite of their long presence in the public consciousness, some fundamental questions have not, until now, been addressed: How will these flying vehicles impact our urban environments? How can issues of energy, sound, and safety be approached? What protocols should be established with authorities to guarantee their safe and harmonious integration? More importantly, how could they be leveraged to improve our cities – not only for their users, but for everybody? To answer these questions, MVRDV worked with Airbus, Bauhaus Luftfahrt, ETH Zurich, and Systra to research and plan for the future of Urban Air Mobility (UAM).

A leader in the field of UAM thanks to their on-demand helicopter service Voom, Airbus Urban Mobility envisions a comprehensive mobility concept. Over the course of the last two years, MVRDV supported Airbus in exploring strategic urban development scenarios that leverage UAM as an opportunity to grow cities around the globe into thriving urban regions. Crucially, the study aimed to avoid any detrimental impacts from this disruptive technology, which can so easily arise when truly revolutionary transport modes are introduced to cities without careful planning for both short-term and long-term scenarios. Instead, the research highlights how, when implemented with urban principles in mind, UAM can reconnect territories with minimal impact, and deliver a multi-modal system that is accessible to, and beneficial for, people of all backgrounds.

The key to unlocking this potential lies largely in vertiports, landing hubs that integrate the aerial network with the existing and future ground transportation system. The research findings envisaged vertiports of various types and sizes, just like traditional transport stops, stations, and terminals. However, unlike stations for other urban transport options such as trains, metros, or buses, the network does not require any linear infrastructure in between. No tracks, tunnels or roads are required, saving energy, natural resources, and land. This allows designers to adapt the vertiports to a variety of different locations, plugging into and enhancing existing urban scenarios with a number of different configurations.

The vertiports have been designed as catalysts for urban improvement by addressing the question of resources and impact as a foundational step in their integration process. Vertiports are thought of not just as stations, but also as hubs of renewable energy, data, and public amenities, that can scale while remaining sustainable and resilient. Air transport incentivizes an ecologically responsible contribution to the local smart grids of energy and data. The research also considered the principles of transit-oriented development, not only by bringing airborne transport links, but also by integrating with other multimodal transport options to serve local surroundings and solve the problem of the “last mile”. In locations that are underdeveloped, vertiports can be designed as opportunity hubs with educational and healthcare facilities, or business incubators, for example, while in areas fractured by infrastructure such as roads or railway tracks, a vertiport can serve as a bridge connecting neighbourhoods.

“As cities become denser and technologies improve, it becomes increasingly clear that the truly three-dimensional city – one that includes flying vehicles – is surely one of the city models of the future… a city where my mobility is at my balcony!” says Winy Maas, founding partner of MVRDV. “But to reach this future will require many small steps. It’s a credit to Airbus that they are thinking about these issues in advance, and doing so in a way that will improve things in the meantime.”

On a broader scale, the research investigates the potential of future UAM networks within cities. It recognises that UAM should not seek to replace cities’ existing transport infrastructure, and acknowledges the short-term business case for UAM as a service that connects major transportation hubs such as airports with business centres. However, it also looks towards a more mature stage in the technology’s implementation. The research concludes that once UAM is well established with an extensive network of vertiports, it could serve as an interesting contributor to a mobility system of discrete and distributed modes that complement rail or road infrastructure.

A mature network of vertiports could serve to connect disadvantaged areas of cities and remote areas without the need for expensive infrastructure; could vastly improve emergency response times; and could even allow ‘technological leapfrogging’ in developing countries, providing a transit network that is relatively inexpensive to create in cities that never developed extensive metro or tram systems. Together these benefits can give cities the accessibility that is needed to attract new economic opportunities.

Communicating this nuanced vision for a connected future to the public requires an approach that spans multiple forms of media. In order to create a tangible vision of what such a future might look like, MVRDV and Airbus developed a number of scenarios based on cities around the world that show how vertiports could be integrated into a variety of urban scenarios. The research findings were also translated into an immersive exhibition titled The City and the Sky Above, created through a collaboration between MVRDV, Airbus, and Squint/Opera that is currently on display at the Bi-City Biennale of Urbanism\Architecture, with the potential to be shown at other events worldwide. Together, these illustrations and media installations give a glimpse into a future world that masters technology for a more responsible, more collaborative, and more accessible society. 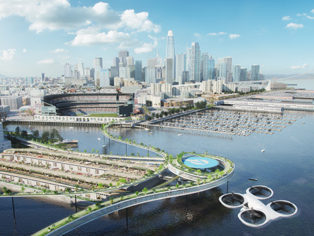 MVRDV and Airbus developed a number of scenarios based on cities around the world. Here, a design shows UAM promoting green mobility in San Francisco Images: © MVRDV 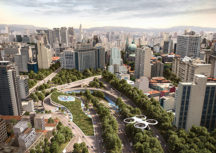 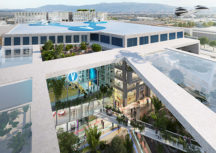