The jurors were persuaded by the clarity and confidence of Hopkins Architects’ competition concept design, as well as the team’s collaborative approach to creating exceptional higher educational buildings internationally and the quality of their team which included, amongst others, leading engineers, Expedition Engineering, and landscape design partners, GROSS.MAX.

The winning team described their competition scheme as an open quarter with a bold new urban frontage made up of a series of orthogonal academic pavilions, showcasing the university’s activities in new technologies such as AI and robotics; their vision taking its inspiration from the famous infinity street at MIT in the US. The scheme both echoes the format of the original MK vision with calm super-rational buildings surrounded by greenery, while also envisaging a pedestrian- and bicycle-friendly future.

A new civic realm for the proposed new university quarter includes a graduation lawn and formal water feature. The forum, the scheme’s centrepiece, is immediately recognisable with an eye-catching drum-shaped red lecture theatre within the glass entrance lobby, reminiscent of a giant friendship bead, which is welcoming to students, visitors and locals.

Hopkins Architects recently completed the new Smith Campus Center at Harvard University, which is designed to foster the campus’s intellectual, cultural and social experience, and support the wider community. Highlights from the practice’s extensive and varied portfolio include the London 2012 Velodrome, the George Green Library at Nottingham University, the Wellcome Trust: Gibbs Building, and the award-winning eco-building, the WWF-UK’s Living Planet Centre.

The proposed new university, which is due to open to its first undergraduates in 2023, will focus on digital economy skills; new technologies including AI, robotics and cyber security; and practical, business-and-entrepreneurship-oriented courses as well as courses in design thinking and professional and commercial skills. The university also plans to offer fast-track two-year undergraduate degrees.

MK:U, a partnership between MKC and Cranfield University, will use the new university quarter and the wider city as a ‘living lab’ to test out new concepts and ideas, and inspire Milton Keynes’ students and citizens. Benefitting from the last major undeveloped site in the city centre, and mixing university facilities with public spaces, MK:U will also be a destination open 24/7, welcoming the wider community.

“The jury was impressed by Hopkins and their proposals. We are looking forward to working with this world-class team to develop further the design for MK:U, a design that will capture the excitement and innovation of Milton Keynes and reimagine its architecture for a digital and high-technology future.”

“Hopkins impressed the jury with their concept design for MK:U, but we also admired their attitude and their range of work, most recently at Harvard. We look forward to developing the final blueprint for MK:U with Hopkins, starting from this initial design concept. MK:U will be a huge asset for Milton Keynes and the next chapter in our development, and we want to get it right.”

“The red lecture theatre encased in the glassy entrance is like a giant red friendship bead symbolising both the city and the university coming together — and the sociability and fun of the MK:U experience. This is the physical heart of an institution that will be powered by coolly-intellectual technological and entrepreneurial energies.”

“We are delighted to have won this prestigious competition for a brand new university in Milton Keynes and it is a particular honour bearing in mind the high calibre of the other shortlisted teams.”

“This commission is special because MK:U presents a unique opportunity to re-think higher education through its radical curriculum focusing on the digital economy. By bringing new academic and commercial activity, jobs and social life to the city centre, we also have the opportunity to renew the civic identity of Milton Keynes, which at 50 years old is once again looking to the future.”

“All our best projects have come about through a collaborative process and the next step is to test the ideas we had during the competition with the university leaders, local Council and people of Milton Keynes. Our team are all very enthusiastic about getting started on the creative process together.”

The winning team’s design proposals can be seen on the competition website at: competitions.malcolmreading.com/mku/shortlist

The first stage of the MK:U international design competition, which launched in January 2019, attracted 53 team submissions comprising 257 individual firms from across the globe. The five finalist design teams who reached the second stage were asked to submit concept designs for phase one (construction budget approximately L188 m), including a masterplan and key buildings for the 10-hectare city centre site, and for 61,120 sqm of built area.

The jury praised all the finalists for their hard work and commitment. The four other finalists comprised teams led by Co:MK:U; Hawkins\Brown; Lifschutz Davidson Sandilands; and OMA.

An honorarium of £30,000 will be paid to each finalist team for their competition work. The competition was run under EU procurement rules and to current UK legislation.

MK:U is expected to be delivered in three phases and will complete within 15 years, when the fully-fledged university will serve 15,000 students.

Located at the heart of the Oxford to Cambridge innovation arc and just 30 minutes from London by train, MK, now known as a Smart City, has excellent connectivity; its proximity to the M1 motorway and rail network means twenty million people can reach it within 60 minutes. 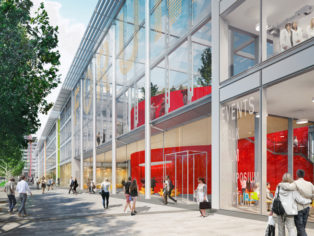 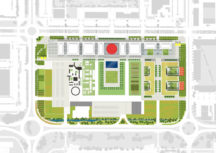