Home is where the art is

Dorset’s biggest private landlord has made a statement after urban artists transformed a huge wall at its headquarters.

DWP Housing Partnership now has a magnificent and colourful addition to its base in St Clements Road, Boscombe.

It depicts a woodland scene with depth and a variety of creatures, fungi and plants.

Joel Wimbleton, director of Redtail Studio, which is based in the Royal Arcade in Boscombe, said:

“We wanted to bring nature into an urban environment.”

“DWP Housing Partnership builds houses so it seemed fitting to bring a bit of wildlife to a developer.”

“The mural is superb – it was hard to imagine what it was going to look like in full-size, but we’re really pleased.”

“It will hopefully raise a smile when people come to visit us and really gives the place some colour.”

“We are keen to support local businesses and Red Tail Studio is an enterprise based nearby.”

The two artists who completed the work were Jack Kellythorn and ‘Maskart’. 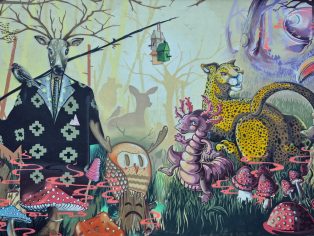 Steve Wells and Joel Wimbleton in front of the mural