HLM has won the Landscape Institute’s coveted ‘Design Ideas’ competition with a futuristic masterplan that reinvents the role of the public park today with botanically-inspired forms influenced by the work of Joseph Paxton.

The competition brief was to examine the role of the public park in the 21st century and look at ways of revitalising and reclaiming urban parks to become multi-functional community spaces that are economically viable and sustainable.

HLM’s winning exhibit, ‘Power to the Park’ explored the largescale regeneration of Nine Elms, using London’s Vauxhall as a contextual example of a place in need of urban intervention. The masterplan concept merges Vauxhall Park with Vauxhall Pleasure Gardens, which was once famed for its dynamic and energetic landscape, to create a flagship scheme that seeks to restore the allure, creativity and wonder of Victorian parks renowned for their escapism from the smog and Industrial Revolution.

Inspired by the spirit of Victorian inventiveness, HLM proposed a series of forward-thinking interventions that they believe will transform the park of the future. These include solutions for renewable on-site energy generation, mixed funding and management models, innovative biomimicry and organic form, night-time use, remote outdoor working connected to Wi-Fi, a renewed focus on biophilia and contact with nature and exhibits that will showcase the interface between green technologies, landscape and the environment.

The ‘Pleasure Gardens’ to the north of the park offer a platform for the existing green infrastructure to incorporate renewable energy sources, including ‘umbellifer’ shaped solar panel canopies and floating, high-performance wind turbines that can make use of faster wind speeds at higher altitudes. The helium filled rigs are installed with lightweight wind turbines and perform as pop up power stations, providing enough energy to power 15 homes as well as telecommunication transmitters.

To balance the vibrancy and intensity of the Pleasure Gardens, Vauxhall Park to the south would be a destination for respite, relaxation and recreational activities with special ‘downtime’ zones for reading and mobile working supported by wireless technology. The space captures the human need for restoration through contact with nature, with winding paths through gardens that radiate around a large, centralised green space. An urban square would link the two parks along a pedestrianised public realm, providing commercial and investment opportunities for a variety of mixed uses under the existing railway arches and would be key to integrating the spaces and providing long-term revenue.

Designing the park as a day and night time destination was fundamental to opening up opportunities for the public to visit at any given time and enjoy live entertainment such as concerts, cinema, theatre and exhibitions, which would be facilitated by energy from sustainable sources within the park.

“With Power to the Park we really wanted to inspire a new generation of thinking for the existence of public parks and the role they play within communities today. It’s a shame that our parks have adopted a ‘lockdown at sunset’ approach when they were once used throughout the day and evening and famed as destinations to visit. We feel that this is something we need to address in how we approach not only the design of our parks in future, but also their commercial potential. We want to return parks to the dynamic and exciting environments they once were famed for, while ensuring they retain the restorative aspects that make them so essential in dense cities.

“Joseph Paxton was pioneering in his approach to parks; from creating the first public park using land-value based funding models through to botanically-inspired engineering and the use of newly-discovered plant species. We were greatly inspired by his experimental character and enjoyed reinterpreting this approach within a contemporary context using the advancement of technology and sustainability to our advantage.” 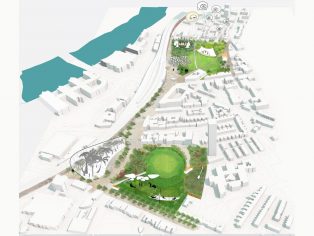 HLM, Power to the Park, site