HLM’s Tigh Na Croit, a new build Passivhaus in Ross-shire, has been announced as the winner of the Single Dwelling New Build category at the Saltire Society Housing Design Awards. Chaired by Kirsty Wark and presented by the Minister for Housing Kevin Stewart MSP, the judges praised the highly liveable, simple and well executed home for its fantastically clean plan with crisp, simple detailing.

Now in their 79th year, the Saltire Society Housing Design Awards celebrate excellence and achievement in Scottish house building and place-making and are part of a busy programme of special events and awards planned to celebrate the Saltire Society’s 80th anniversary year.

The Single Dwelling New Build award sought excellent examples of houses for individual clients that demonstrate a strong concept, a successful relationship to their site and an appropriate energy strategy.

Set in the hamlet of Gorstan in the Scottish Highlands, Tigh na Croit nestles quietly into an area of former crofting land. The dwelling creates a high quality contemporary, low energy, environmentally responsible house which takes highland and rural design as inspiration whilst achieving the European Passivhaus standard to radically drive down energy consumption and CO2 emissions.

As one of the most northerly certified Passivhaus projects in the UK, Tigh na Croit achieves an 80% reduction in energy through considered orientation, simple architectural form, careful detailing, high levels of air tightness and a super insulated building fabric.

Tigh na Croit was also recently commended in the Residential category at the Scottish Design Awards, won the Architectural Excellence award at the Scottish Home Awards and picked up a RIAS Award in the Special Category Award – the RIAS/ Zero Waste Scotland Resource Efficiency Award.  The house is also shortlisted for the UK Passivhaus Awards due to be announced on 7 July. 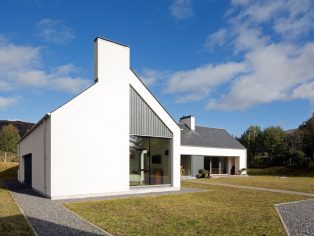