HLM has been appointed to the new £250 million Defence College of Logistics, Policing and Administration at Worthy Down in Hampshire.

Working alongside Skanska, HLM designed the winning scheme, which is part of a Ministry of Defence (MoD) project to upgrade the site as well as redevelop its Princess Royal Barracks in Deepcut, Surrey.

The contract includes the design, construction, and mechanical and electrical fit-out of the site’s living quarters and facilities, as well as the supporting infrastructure for new buildings at Worthy Down. It will also accommodate the headquarters for the Royal Logistic Corps and the Adjutants Generals Corps, along with other logistic and personnel training elements of the armed forces. HLM has designed the site to ensure it has future expansion capabilities.

The Defence Infrastructure Organisation (DIO), the MoD’s property and services provider, awarded the contract to Skanska and HLM. HLM is also the architect and masterplanner for the Deepcut site, which will be redeveloped to provide 1,200 homes, a school and other community facilities.

Chris Liddle, lead designer for the project and Chairman at HLM, said:

“This is an exciting opportunity to support the MoD in creating new, world class facilities for our armed forces. It will also provide much-needed housing and amenities for the people of Deepcut village. Both locations will benefit from our understanding and experience of working with the MoD, as well as our strong reputation for sustainable design.

“HLM celebrates its 50th anniversary this year, during which time we have worked extensively in the defence sector, and securing this major project further strengthens our position. We have worked hard to become a trusted partner to the public sector and will bring the same high quality architecture and facilities to both Worthy Down and Deepcut, as we have before with award-winning schemes such as the Defence Academy and Welbeck College.”

Work is due to start immediately and set to conclude at Worthy Down in the summer of 2018, with development at Deepcut ongoing until the community there is fully established. 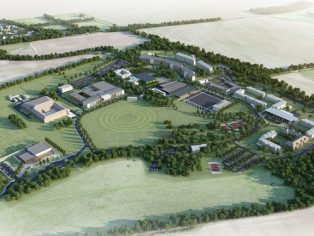